THE HEART AND SOUL OF BAD BEHAVIOUR 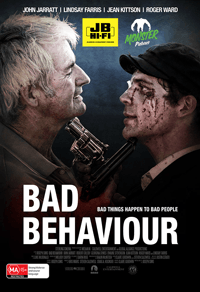 THE  HEART AND SOUL OF BAD BEHAVIOUR
SAMANTHA MILNE

Bad Behaviour is the award winning feature debut of young writer, director, and producer, Joseph Sims. Likened to Pulp Fiction, Bad Behaviour is a fast-paced, darkly comedic ‘serial killer thriller’ – bloody, brutal, and totally badass. It earned six awards at the 2010 Melbourne Underground Film Festival, as well as official selections at film festivals around the globe. Considering its modest budget, novice nature, and mere eight months in the making, one wonders, how did they do it?

“I met Joseph in the parking lot at the IF [Inside Film] Awards in 2008,” said producer, Steven Caldwell. “We got along, and he asked if I wanted to be involved in a short film.” Steven liked the idea, so Joseph began writing the script, sending drafts to Steven for his opinion. And thus, Bad Behaviour was born.

Steven had been working in the industry for several years by that time, and was able to provide Joseph with some useful connections and assemble an ideal crew, playing everyone to their strengths. He also supervised the editing and visual effects of the film. When they decided that it would be beneficial to strengthen the producing team, it was Steven who introduced Kris Maric. He had worked with her previously, and knew she was the right lady for the job.

With Kris came Craig A. Kocinski, and the team of producers was complete. Both Kris and Craig had been working in the film and entertainment industry since the late nineties, and their experience and professionalism were invaluable. Kris was also responsible for getting the script in front of Australian screen legend, John Jarratt, who she had worked with on the film Savages Crossing. John liked the script and Joseph’s tenacious attitude, and was happy to get on board.

Once John was involved, the project expanded significantly; and film’s budget was raised from around $20 000 to $500 000 by private investors Joseph knew from his time working in finance management, and approximately $80 000 worth of sponsorships expertly sourced by Craig. John’s involvement was critical in cultivating interest and increasing the film’s credibility, which are important but difficult factors in independent cinema.

But even with the large boost, the budget was low by film standards. Fortunately, the Gold Coast community was more than happy to help out. Jura Australia supplied the coffee, Town and Country Motel provided accommodation, Canon Australia and Bentley’s Camera House allowed the crew to shoot with the highest quality lenses, and Southport Indoor Pistol Club allowed Lindsay Farris to shoot with a gun like the one his killer character uses in the film. Replica firearms came from Go Camping, motorcycles and related accessories came from Morgan and Wacker Motorcycles, and the Harley came from Scoot ‘n’ Toot. Coastal Logistics offered traffic control, Gold Coast City Council helped with locations, and Tyrell’s Wines provided great support too. “It [the entire project] was the kind of thing that needed a lot of support,” said Craig, “and we were very fortunate to have it.”

Bad Behaviour is due for its Australian DVD release through Monster Pictures (The Human Centipede) and JB Hi-Fi on January 17th, and is available for pre-order at jbhifionline.com.au. To celebrate this, on January 13th, Cinema Nova and the Gold Coast Art Centre are hosting A Night of Bad Behaviour: a one-night-only special screening. Melbourne audiences will get the chance to meet John Jarratt, who will be attending the event at Cinema Nova.