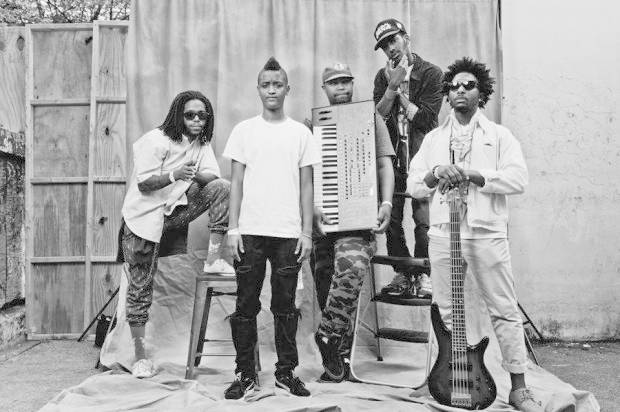 The Internet – the Los Angeles-based, R&B/soul band fronted by Syd and Matt Martians – will release their third album, EGO DEATH, on Columbia records/Sony Music Entertainment Australia on June 30th, 2015. The album’s first song, a sultry, skittering swirl of a song entitled ‘Special Affair,’ has premiered via The Fader – listen here. EGO DEATH is The Internet’s most evolved album to date, featuring guest appearances from the likes of Janelle Monae, Tyler, the Creator, and Vic Mensa.

The band says EGO DEATH is about “being vulnerable and honest. It’s about us growing up as a band and as individuals, and the challenges we’re facing and learning from. It’s about us acknowledging our egos and the egos around us, and using them the best way we know how.”

EGO DEATH was recorded in the band’s hometown of Los Angeles. The album is a heady mix of confessions and come-ons, shiny Rhodes keyboard glimmers, chugging drums, slinking bass lines, and Syd’s honeyed voice anchoring the mix. It’s a record that connects the dots between Digable Planets, Erykah Badu’s Baduizm, the warm, inviting breezes of the West Coast, and the stories that only happen very late at night or very early in the morning, all played by musicians who are carrying the soul torch for the new generation.

The Internet began as two people – Syd and Matt. Syd taught herself how to record, engineer, and produce at age 15. She also sings, imbuing every song with a sultry, mellifluous, quiet power. Matt produces and plays synths. She’s now 23; he’s now 26. Like many post-modern relationships, the duo initially met on MySpace in 2008, only to meet in-person three years later.

The Internet branched off from the Odd Future collective and started their own band in 2011. Syd had been writing music since she was small; she put this on hold to become OF’s DJ and producer, and picked her songs back up in 2011 to make her first full-length album with Matt.
   
When they play live, The Internet is a band – a six-person outfit whose youngest member is 17. They began playing as a full band in order to tour behind FEEL GOOD, and the band members all contributed their talents to The Internet’s forthcoming album.