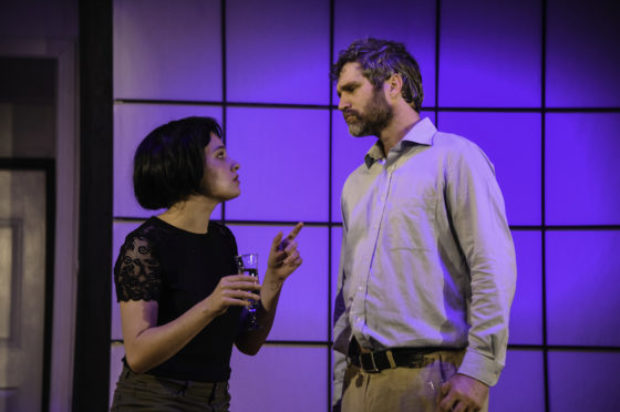 The Javeenbah Theatre Company’s new production, opening Friday (July 19th), is one of those murder mysteries with more twists and turns than a theme park roller coaster.

Anthony Shaffer’s Murderer, which was a massive West End hit when it had its London premiere back in 1975, is a macabre memorial to some of Britain’s most infamous murders.

In fact director Barry Gibson is being so tight lipped about the story’s ebb and flow he’s asking those who have seen it not to give even the slightest hint of what happens on the two-hour theatrical journey.

All we can say about this comedy thriller, set in England’s Dorset countryside, is that the central character, painter Norman Bartholomew (Nathan Schulz), is a man obsessed with murder and murderers.

He takes great pleasure in talking about them, quoting them and even recreating their crimes and hopes one day to equal what he considers to be their greatness.

The character also has two women on his mind – his wife Elizabeth (Naomi Thompson) and mistress Millie (Ella DeVilliers) – and that’s about as much as we can say.

Throw in a pesky roly-poly country policeman with a down to earth manner – played by Javeenbah veteran Trevor Love – and you have both the full cast and a cracking crime night at the theatre tinged with dark humour.

Shaffer, whose twin Peter Shaffer was also a playwright (Royal Hunt of the Sun, Amadeus), wrote several plays, including the 1970 hit Sleuth (adapted into a film with Michael Caine and Sir Laurence Olivier), and was married to actress Diane Cilento.

The couple owned and operated the Karnak Theatre in Queensland’s north. Shaffer died in 2001 aged 75.