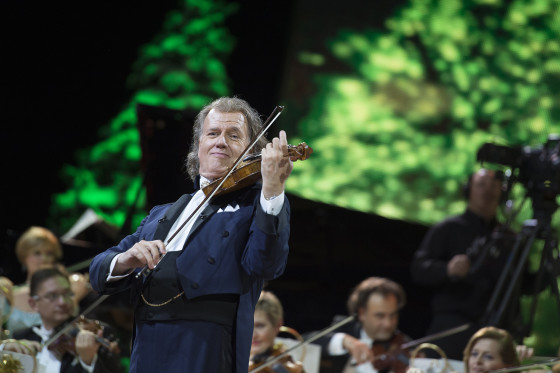 THE MAESTRO DELIVERS EARLY CHRISTMAS PRESENT FOR CINEMAS
‘André Rieu: Christmas with André’ in Cinemas – #2 at Australian Box Office for the weekend

André Rieu: Christmas with André took almost $AUD1.1 million at Australian cinemas on the weekend to claim #2 position at the box office.

The satellite-delivered* concert by the world’s most popular classical music artist – André Rieu: Christmas with André – was second only to Fantastic Beasts (in its second weekend) at the Australian Box Office on the weekend and ahead of new opener The Founder.

Distributor CinemaLive’s André Rieu: Christmas with André grossed $AUD1,088,128 from 130 cinemas in Australia with one screening on Saturday November 26 and one on Sunday November 27, with an excellent screen average of $A8,370.

The 130-minute festive celebration in cinemas featured a 90-minute filmed Christmas concert by André and his world-famous Johann Strauss Orchestra, sopranos and tenors, plus André took fans on an intimate tour of his hometown Maastricht’s magical Christmas highlights and joined CinemaLive host Charlotte Hawkins for a Q & A to answer questions submitted by cinema audiences.

Event Cinemas (including BCC & Greater Union) dominated the Australian box office for André Rieu: Christmas with André, with its gross of $AUD579,415 accounting for 53% of the total gross, eight of the Top 10 performing cinemas and 14 of the Top 20.

In New Zealand, André Rieu’s 2016 Maastricht Concert in Cinemas grossed $NZ123,400 from 13 cinemas with one screening on November 26 and one on November 27.

CinemaLive Director and CEO, Peter Skillman, said he and co-Director Janelle Mason were particularly pleased that in a year when André Rieu toured arenas in Australia and New Zealand, not only did his Maastricht Concert grow significantly and set a new box office record, but Christmas with André, the first André Rieu Christmas Concert to screen in Australian and NZ cinemas, had performed so strongly.

“We’re beyond delighted. It is testament to André’s phenomenal connection with his audience that his two cinema events and a live tour in one year have done so incredibly well. But it’s not hard to understand when you see how much joy André and his orchestra and soloists and guests bring to the audience.”

* Satellite delivered program includes Q & A and Maastricht tour which are filmed several days prior to cinema screenings, and concert which is pre-recorded – not live.

André Rieu’s 2017 Maastricht Concert in Cinemas will screen in Australia and New Zealand on August 5 & 6, 2017 – www.andreincinemas.com