THE NAKED MAGICIANS AT THE GOLD COAST ARTS CENTRE 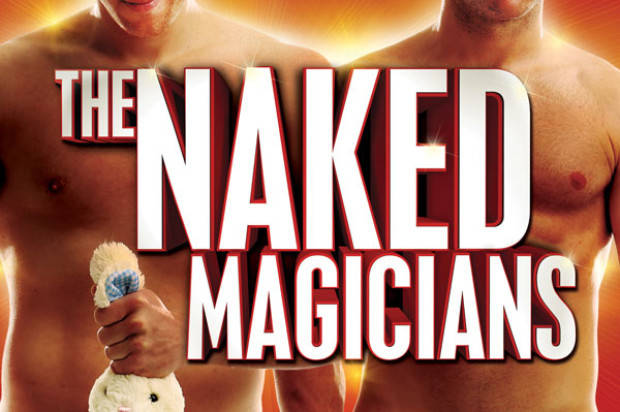 The world’s cheekiest and naughtiest magic show, The Naked Magicians, is coming to the Arts Centre on the Gold Coast on the 26th of February 2016. Not only have they sold out shows across Australia, New Zealand, Hong Kong and the USA, they have also performed to audiences on televisions and stages across the globe now Christopher Wayne and Mike Tyler; two of Australia’s biggest names in magic take to the stage with their sleeves up and pants down.

Some of the features of their act include magic, mirth and mayhem as these two hot and hilarious magicians take magic to a whole new level. You’re guaranteed to see no top hats and capes, but rather full frontal illusions. These two sleeveless magicians bring a new meaning to “now you see it”, leaving audiences wondering just where do they hide that rabbit? In the words of the Producer, Samuel Klingner, “Good magicians don’t need sleeves. Great magicians don’t need pants, and Chris and Mike as The Naked Magicians don’t need either to leave audiences spellbound.”

Christopher Wayne: Christopher’s most notable role is as the magician on Channel 10’s Toasted TV as has made other TV appearances on Sunrise, Totally Wild, The 7PM Project and was even a guest contestant on Are You Smarter Than A 5THGrader. Following his appearances on television, he is the first magician in Australian TV history to have his own TV show, More Than Magic, with successful runs in New Zealand, the UK and the US. He has worked his magic alongside names such as Gordon Ramsay, Pink and comedy legend Jerry Lewis, and was the comedy writer for the B105FM Breakfast Show for four years, which was spent being perfect training for writing The Naked Magicians. As Christopher often says: “If you don’t like my naked body in this show, just remember I’m really
funny.”

Mike Tyler: Mike is regarded as one of Australia’s premiere corporate entertainers having performed for companies such as Qantas, Channel Seven, Commonwealth Bank, Hyundai, and Network Ten due to being an outstanding magician, mentalist and comedy hypnotist. Mike’s performances which include interactive magic, comedy magic and hilarious hypnosis shows all over Australia and has wowed audiences throughout Europe, Canada and USA.
While Brisbane is his home, he studied stage hypnosis for two years in the USA, which added comedy hypnosis to his line-up in 2011. Apart from his stage shows, he also hosts a regular magic segment on Network Ten’s Toasted TV and performs magic as a volunteer in the specialist clinic at Mater Children’s Hospital; with his clothes on!.

Simon Painter originally created the concept for the show, who also created The Illusionists, Cirque Adrenaline, Le Noir Cirque, and Circus 1903.
“The most entertaining show of the year!” – AUSSIETHEATRE.COM
“It’s R-rated magic at its stunning best” – THE GLOBAL GODDESS
“Definitely the hottest ticket in town” – AUSTRALIAN ARTS REVIEW