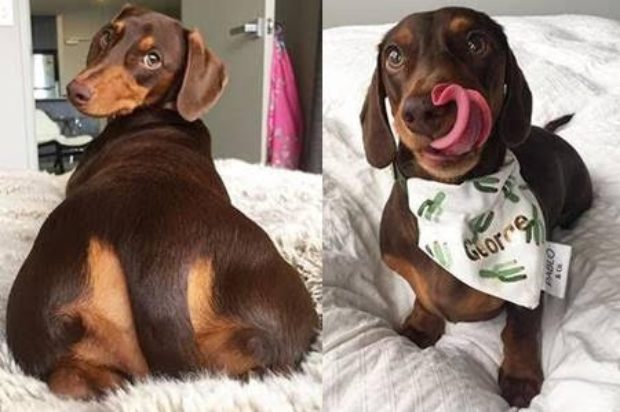 The Osbourne Hotel is proud to announce that ‘Gorgeous George’, the incomparable chocolate brown sausage dog and social ‘hound around town’ from Newstead is the official Ambassador for the inaugural Paws and Pints event happening this Sunday, 12 November from 11:00am – 3:00pm.

The self-proclaimed King of Newstead, the food-obsessed one year old George is absolutely delighted in taking on his first ever Ambassadorial role, and even more excited that it’s for his very own local, Brisbane’s Osbourne Hotel.

One of a litter of five boy dachshunds born on the Gold Coast, George was chosen by his mum, Anna because he was playing by himself, once she picked him up, he snuggled in straightaway and found home. Named after her favourite Australian Rugby Union player, George Gregan, George joined the family alongside Anna’s parents and younger sister and now commands centre stage in their family home at Newstead.

George attended and graduated Puppy School and now does regular home training with Bark Busters. He has a large Brisbane network as he and his mum Anna are part of Facebook group Brisbane Dachshunds, who regularly engage in meet-ups twice a year, he also has regular catch ups with his best friends around inner-city Brisbane. With a busy social life, George needs to stay with the trends, therefore it is only fair he has his very own wardrobe. Jumpers are a must for George in the winter however he can never pass up an opportunity to wear his favourite ‘George’ bandana. Of course George is on Instagram (@itsgeorgeous) with over 30,000 loyal followers, he is a lover of Puppycinos and a regular at the Jan Powers Farmers Markets in New Farm every Saturday – yes, he’s quite the social hound around town.

George couldn’t be more thrilled to take on his new very impawtent role as Osbourne’s Hotel ambassador role. He will be at Osbourne Hotel’s Paws and Pints event from 12:00pm to 2:00pm on Sunday, 12 November.

In further exciting news, the Osbourne Hotel to host inaugural Paws & Pints on November 12. From 11am to 3pm Paws & Pints will see the hotel’s Backyard area (aka the brilliant beer garden) taken over by happy hounds and their owners. And of course, there’s a YAPPY HOUR from 11am to 1pm as well as a Puppy Photo Booth and lots of fab stuff for hounds and humans. Supported by Stone & Woof, oh we mean Wood, creators of the famous Growllllers, the event will raise funds for the Animal Welfare League QLD. Donations will also be collected via the Tap to Donate EFTPOS machine.

“The bar team at The Osbourne are all ready to paw sensational local and craft beers from our 94 taps, while our four-legged guests will be spoilt with doggy treats, lucky dog prizes and more,” said The Osbourne Hotel Manager Jason Hirt.