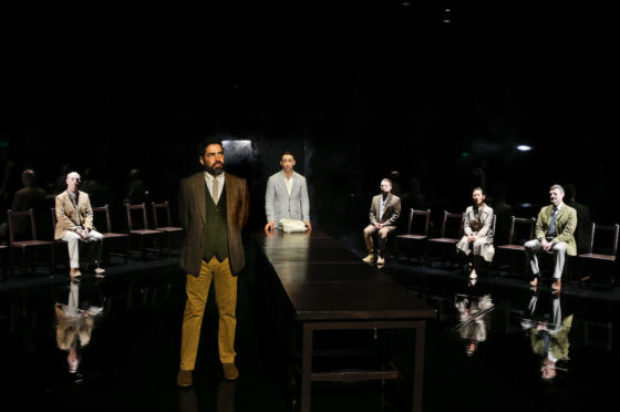 On Centre Stage
Nearer the Gods. Review by Douglas Kennedy.

Back in the late 16th/ early 17th century Shakespeare wrote (in Hamlet): ‘There are more things in heaven and earth, Horatio, than are dreamt of in your philosophy.’

Less than a century later there were less unknown things, thanks largely to one man, Isaac Newton, who blessed the world with a wealth of knowledge.

The English mathematician, astronomer, theologian, author, physicist and natural philosopher, whose credits include the Laws of Motion, universal gravitation and developing calculus, is often characterised in the everyday by his inspirational observation of an apple falling from a tree (gravity).

But, of course, his work and the man himself is much more complex and the birth of revolutionary ideas can be extremely stressful and, indeed, even painful.

Which brings us to the world premiere of legendary Australian playwright David Williamson’s latest excellent offering Nearer the Gods.

This engaging story of a remarkable man, and his circle of friends, critics and enemies, is the Queensland Theatre’s pick to open the refurbished Bille Brown and what a first class choice. Nearer The Gods, which charts the progress of Newton’s classic scientific publication Principia Mathematica, might sound frighteningly daunting, but at its heart it’s a human story with all the insecurities, frailties and vulnerabilities of genius.

Newton had – what has now become sexy to tag – a beautiful mind, but his humanity was susceptible to many seemingly childish flaws.

What Williamson describes in his program note as his madness is demonstrated by his behaviour, which includes a deep seated hatred of his revival Robert Hooke.

Hooke was the president of the Royal Society who Williamson showcases as a petty, jealous man out to undermine anyone smarter than himself.

The story unfolds with Rhys Muldoon playing the brilliantly bonkers, Newton, while Colin Smith is suitably cheap and even nasty as Hooke.

Williamsons’ proposition is that left to their own devices these two self-destructive men would have ruined Newton’s ambitions, but fortunately there was a passionate go-between in the person of Edmund Halley (of Halley’s Comet fame) played with great aplomb by Matthew Backer.

There’s other great names, and themes, from the era as the story unfolds in modern day dress and the characters revolve around each other literally like planets (well done movement director Nerida Matthaei). 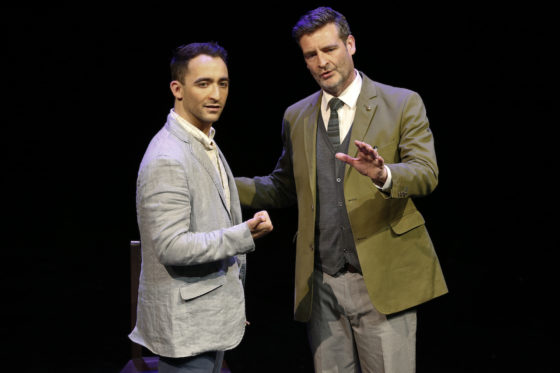 While Newton’s religious conviction is manic – when the play opens he is trolling through Revelations to pin-point the second coming – and Mary Halley is devout, Edmund Halley is an atheist.

A dangerous stand to take in 17th England.

Nearer the Gods is a play decked out with a smorgasbord of ideas, which explores multiple themes such as reputation, family, faith, ego, power and the human condition in all its facets.

Under the imaginative direction of Sam Strong this is a production which deserves the sometimes overdone tag not to be missed.

A great night in a great ‘new’ theatre which I am convinced Bille Brown would have loved.