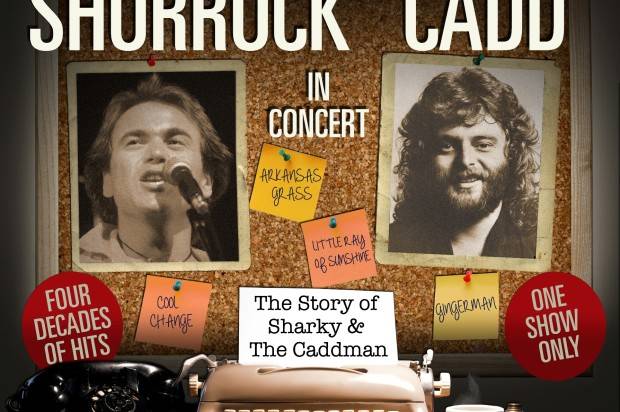 GLENN SHORROCK AND BRIAN CADD have reunited on stage for an Australian tour which began late October, 2013 and has proved a massive success with sell out shows and rave reviews.

They are on the road again with 8 exclusive shows along the QLD Coast starting in Cairns on 25th June, followed by Townsville, Mackay, Rockhampton, Maryborough, Bundaberg, Nambour & finishing in Caloundra on 4th July.

Fans can expect to be taken back in time over the past 4 decades with a smorgasbord of timeless smash hits from their past supergroups The Twilights, The Groop, The Bootleg Family, Axiom and Little River Band. Such as: Little Ray of Sunshine, Reminiscing, Ginger Man, Arkansas Grass, Cool Change, Help is on its Way, Don’t You Know its Magic and many more.

Shorrock and Cadd are Australian Musical icons – both known for their incredible song writing and performing talents. They first collaborated in 1969 when they formed AXIOM an Australian ‘supergroup’ designed to take on the English Market. Through AXIOM they had huge Australian hits including Arkansas Grass, A Little Ray Of Sunshine and My Baby’s Gone.

Along with his success with The GROOP, Cadd has penned songs for Joe Cocker, Ringo Starr, The Pointer Sisters, Bonnie Tyler, Charlie Daniels and many more. And solo smash hits under his belt such as Ginger Man, Let Go, Don’t you Know its Magic to name a few. Shorrock is best known as part of the internationally acclaimed LITTLE RIVER BAND and mega hits including Reminiscing, Help is on Its Way, Home on a Monday and the classic Cool Change.

In addition, Shorrock and Cadd are celebrating the launch of their new album – The Story of Sharky and the Caddman. The album is in stores NOW.

On the collaboration Cadd says “The two of us have been mates since we were little more than kids. Musically we just always seemed to click and our voices have a most unique sound together. We’ve certainly been on all the rides and every step and adventure has been laced with humour and fun. It happened all during the recording sessions and I’m certain will continue on the road. The status remains very much quo”.

“In recent times Brian and I talked about a reformation of Axiom which was a fairly brief but wonderful part of our musical lives…and which spring – boarded us both into the international music scene. This tour and album is made especially enjoyable by the inclusion of Stockley, See and Mason as well as our original Axiom drummer Doug Lavery in the lineup,” says Shorrock.

Take a journey over the past 4 decades with Glenn Shorrock and Brian Cadd, two of Australia’s most successful and internationally renowned music legends.