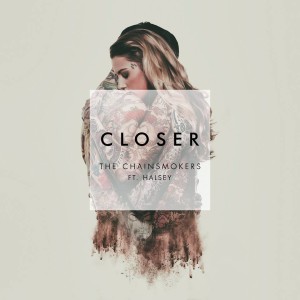 After going 3x Platinum with their hit single ‘Don’t Let Me Down’ featuring Daya, The Chainsmokers have released their new single ‘Closer’. ‘Closer’ sees the chart toppers paired up with global star Halsey.

‘Closer’ is an upbeat pop track that is perfect for any occasion. It is fun enough to be played at parties but cool enough to be played on a lazy afternoon during a good Sunday-sesh. The Chainsmokers have put together a track that will fit in with the modern music scene and Halsey’s effortless vocals give make the track just that little bit more cool.

The mixture of delicate piano and studio produced sounds creates a sound that will appeal to everyone. The builds, instrumental breaks, hooks and modern lyrics are put together expertly to create a cool track.

The lyrics indicate that ‘Closer’ is about two lovers who parted ways and have found each other again and just want to be “closer”. The lyrics are targeted at a teenage+ audience with a sensual chorus and mentioning things like Blink-182, Range Rovers, tattoos and roommates. “So baby pull me closer in the backseat of your Rover/ That I know you can’t afford/ Bite that tattoo on your shoulder/ Pull the sheets right off the corner/ Of the mattress that you stole/ From your roommate back in Boulder/ We ain’t ever getting older” is sexy and fits perfectly with the building music and catchy hook “We ain’t ever getting older” that echoes throughout.

The Chainsmokers have successfully created another chart topping track with ‘Closer’ and the addition of Halsey makes the track even more popular.

BETTY WHO – I LOVE YOU ALWAYS FOREVER (Sony) 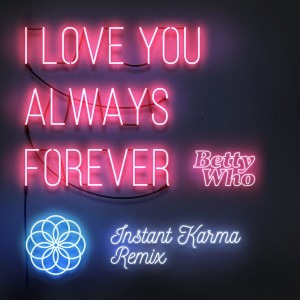 Betty Who’s version of ‘I Love You Always Forever’ is a cool and upbeat track that is equally modern as well as still having some throwback elements form the original. The track starts off slow with Betty’s husky and unique voice serenading with a constant bass beat and minimal instruments accompanying. The chorus then kicks it into the next gear with layered voices, more instruments and a catchy melody that will get stuck in your head for ages.

The electric and techno sounds give the track the modern twist it needs for today’s audience and goes perfectly with Betty’s almost-whispering voice. The chorus: “I love you always forever…!/ Near and far, closer together/ Everywhere, I will be with you/ Everything, I will do for you” is catchy and quick and is finished for the next verse to take over in a beat. With the intricate lyrics of the verses the chorus is almost like an explanation of what the song is really about; which is why it’s simple lyrics and catchy hook work so perfectly.

Betty Who’s version of ‘I Love You Always Forever’ is a great rendition of the 90s classic hit. It is modern and catchy and perfect for music listeners of today.

‘I Love You Always Forever’ is available now! 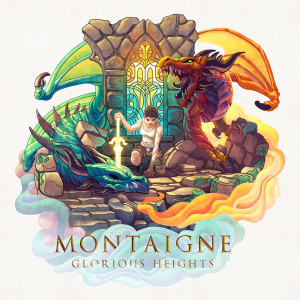 Born Jess Cerro, thrilling songstress Montaigne has finally released her highly anticipated full length LP ‘Glorious Heights’ this week while on her celebratory national tour of Australia. The LP comes after the successful first single ‘Because I Love You’, which was released earlier this month. “Because I Love You is a look back at what you’d known to be a healthy and fulfilling relationship whilst experiencing it, but with a little perspective discovered was pretty bad,” says Montaigne.

The LP was a collaboration of Cerro and writer Tony Buchen. Montaigne also said of the LP, “Tony and I did whatever the hell we wanted without thinking about things we’re fans of too much, only using references to illustrate to one another what kinds of sounds we wanted.  I want to preach empowerment by means of self-improvement; to be able to identify ones weaknesses, analyse them, and mitigate them.  I want people to realise that the warrior of this age is the kind that combats evil by refusing to take part in the processes that sustain it.”

From the very first track of the LP you can tell that ‘Glorious Heights’ is going to be an excellent rollercoaster ride of sound and expert musical production. To explain the unique sound of ‘Glorious Heights’ it is like Marina and the Diamonds and Florence and the Machine collided and exploded into an LP. Quirky, different, but brilliant is the only way to describe this collection of music.

The first track, ‘Glorious Heights’ is a soaring track filled with layered vocals and instruments that is almost ethereal. The next track, ‘In The Dark’, is almost supernatural sounding with the dissonant sounds and minor to major changes throughout; perfect for the title of the song. If they were to ever do a Beetlejuice remake, ‘In The Dark’ would be perfect for the soundtrack.

Every track from ‘Glorious Heights’ is different and unique while still being every bit Montaigne. There are simple and beautiful tracks like ‘What You Mean To Me’ that are contrasted by intricate tracks like ‘Clip My Wings’. Each track, however, showcases Montaigne’s undeniable talent in songwriting and vocal range.

Montaigne’s LP ‘Glorious Heights’ is a delightful array of tracks that will keep you guessing from start to finish. I am sure that the energy in the songs will translate onto the stage as she tours the country this year.