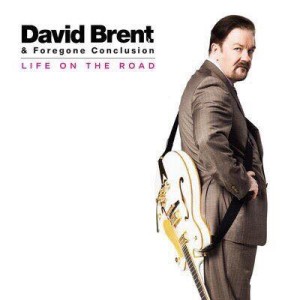 From the genius mind behind the hit show The Office, comes the soundtrack for Ricky Gervais’ new film ‘David Brent: Life On The Road’. ‘David Brent: Life On The Road’ follows the title character 12 years after life on docu-series The Office. Brent is now living out his dreams of being a rock star as he tours the UK with his band Foregone Conclusion. The album was recorded and mixed at Air Edel Studios in London by Nick Taylor with the film being written and directed by Gervais himself.

The album features tracks composed by Gervais especially for the film and track familiar to the Office fans including ‘Free Love Freeway’, ‘Paris Nights’, ‘Spaceman’ and ‘Equality Street’. The album is everything fans will want it to be and more. It is not overly comical and could pass as a legitimate album if it wasn’t paired with the comedy of Gervais.

Each track is easy-listening with calm and simple acoustic guitar and drum kit, typical singer/songwriter type musical accompaniment. The first track ‘Ooh La La’ is a simple track that could be played on a lazy and relaxing Sunday. The next track, however, the comedy comes in with more of Brent’s character coming through vocally.

Throughout the album there are more acoustic tracks and bigger, jazzier tracks like ‘Equality Street’. The big band-cross-Jamaican sounding track features Brent/Gervais singing with a Jamaican accent and is a favourite that fans will love to see and hear in the film. Each track showcases Gervais’ talent as a comedian and as a musician. You can almost see the brilliant performance that Gervais will give as Brent in the film with each track.

‘David Brent: Life On The Road’ is available now! 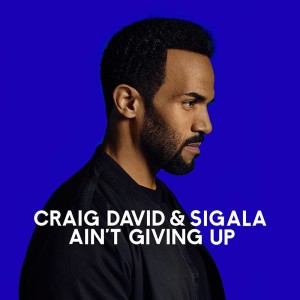 Achieving multi-platinum status, selling over 13 million albums and having 16 top ten hits under his belt, Craig David has released his new single ‘Ain’t Giving Up’. ‘Ain’t Giving Up’ sees David collaborate with UK producer Sigala and follows the announcement of the highly anticipated new album ‘Following My Intuition’ out September 30.

‘Ain’t Giving Up’ is an upbeat and uplifting track with a positive message and danceable beat. The beat of the song is club-worthy with the lyrics of the song appropriate for all ages. ‘Ain’t Giving Up’ showcases David’s knowledge and skill of making music that is catchy and fun and Sigala’s production makes the track even more fun and happy.

The use of steelpans, electric sounds and a pumping beat makes you want to get up and dance and will put a smile on your face instantaneously. The dance breaks after the catchy hook of a chorus is a great way of breaking up the uplifting lyrics that could as easily have been for a slow and heartfelt track.

The lyrics in ‘Ain’t Giving Up’ is like David is singing advice to you as a friend to try and make you feel better. “When you’re sober, laugh/ Sometimes you gotta take a chance to break through/ And when the world is not enough/ That’s what gives you everything or breaks you” and “When the going gets tough/ Just remember it’s me and you for life/ And when the world is not enough/ Baby, are we worth the fight?” paired with the catchy hook line of ‘Ain’t giving up on you’ is the perfect way to make someone feel better when they’re down.

‘Ain’t Giving Up’ is available now! 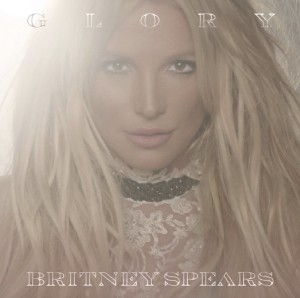 ‘Glory’ is everything that fans new and old will love and quintessentially Britney. ‘Glory’ will make you dance, smile and feel empowered while still being sexy and fun; just like Spears. Although the album is everything Britney Spears is about, the music is modern and fresh with more production value and a new twist on pop music.

From the first track ‘Invitation’ Spears has you entranced with the mystical sound new pop sound. The track ‘Private Show’ takes another turn with a simple beat and melody that has a burlesque theme (perfect for the title of the track). ‘Hard To Forget Ya’ has a Bollywood/pop sound with the fast-paced beat and catchy hook that you can see being a dance extravaganza at Spears’ Las Vegas show.

Each track is easy to dance to and will have your body moving like the iconic pop princess. Spears has grown up with her fans and this album showcases that. It is provocative and sensual yet is still classic Britney with its dance and pop core.

Tracks like ‘Better’ and ‘Change Your Mind’ have pieces of old Britney (‘Change Your Mind’ is reminiscent of her track with Madonna ‘Me Against The Music’) while still exploding into a modern and new sound with more electronic sounds that will perfect for the clubs.