Three amazing projects have been selected to receive $20,000 and embark on the development phase of the upgraded 2020 West Coast Visions program.

To fast track emerging talent and to ensure the final successful West Coast Visions project is production-ready, Screenwest re-visioned the 2020 funding program by introducing a two-staged funding model. The three successful, shortlisted projects will now enter the first stage, which provides them a six-month development period, each supported with a $20,000 Screenwest grant.

Screenwest’s highly acclaimed West Coast Visions initiative is a long-running screen industry talent development and production program that provides funding for low budget features to be produced in Western Australia. It gives one successful first-time feature film director their first theatrical feature film credit and is a career launching pad. The addition of the development stage of the program enables Screenwest to support the development of multiple projects, fostering the growth of early career feature film practitioners.

Head of Scripted (Acting) at SBS Amanda Duthie and Strategic Consultant James Hewison from Kinetic were engaged as industry assessors for the 2020 West Coast Visions program.

Duthie explained, “The three projects selected were stand-outs for future market potential. I will look forward to seeing how the projects, which capture uniquely Western Australian stories, develop over the next six months.”

Hewison said “I was delighted to be an assessor of the West Coast Visions program, vitally important for first-time feature filmmakers. Moreover, the submitted projects were at once thrillingly singular, clear-eyed and bold as they were diverse, seeking to challenge audiences as they were to entertain. The next generation of WA filmmakers is a truly exciting prospect.”

Screenwest Drama Development Manager Barbara Connell said, “It was wonderful to undertake the assessment process with James and Amanda, who provided some fantastic market-based insight. We are exceptionally pleased to see the three projects selected move into the development stage.”

CEO of Screenwest Willie Rowe explained, “The re-design of the program this year was done in response to industry need and a rapidly changing global landscape for feature films. Screenwest are pleased that the re-visioned West Coast Visions enables development for more practitioners, giving them time and guidance to develop their projects to be production-ready.” 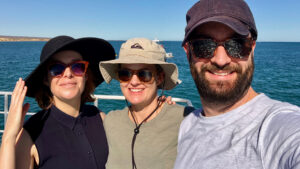