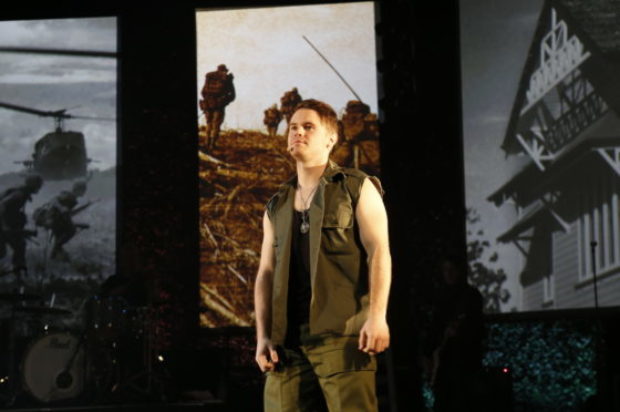 Third time’s the charm for Brisbane’s Tom Oliver, as he gears up for his third season of Rolling Thunder Vietnam, ahead of its return to QPAC on the 18th & 19th of March. “We’re back for a third time, the audience wants it back, they’re really resonating with it”, Tom tells Hush Hush Biz. “And this is my third show, they just can’t get rid of me, I’m back again!”

In Tom’s own words, Rolling Thunder Vietnam, directed by David Berthold, has been described as a ‘tour de force’, following four characters living through the Vietnam War and how their lives and experiences are affected. Tom plays Johnny, a ‘larrikin from the bush’ – although he insists he’s playing an iteration of himself – who decides to join the Australian Army for a gap year after high school, soon realising it isn’t actually the holiday he imagined. The show features real letters written by people from that time, while sprinkled with hits and a music score from the era, backed by esteemed musical director Chong Lim and some of Australia’s best musicians.

Tom is more than enthusiastic when talking about the show, having been cast in the original tour back in 2014, and cites it as the best experience he’s ever had so far. “It’s so special to be performing for people who actually lived through an era – and representing people who lived through it, it was a very crazy time in Australian history”.

The hard hitting subject matter might be tough, but Tom has handled it like a total professional. “When I started in the role, there was a lot of internet searching and youtube videos, documentaries. Since we started touring though, we’ve met a lot of veterans who had been through that period of time. I met one guy whose hip flask saved his hip from being shot, and he brought it out and showed us the bullet mark that the hip flask took”. While the preparation may have started from an online, research level, it’s the stories from the different veterans that have given Rolling Thunder Vietnam that authentic edge. Tom is honoured by the feedback too, stating all the veterans who have seen the show are proud of the way their stories are being told.

For Tom personally though, the show is a bit of a family affair. “My Dad was in the Australian Navy, my great granddad fought in the first World War as a soldier, and my aunty was a singer of the Australian and American troops in Vietnam”. It’s through this family connection that he can relate to his character, and bring a personal touch to the show. “Being a performer, I can’t really compare my lifestyle to those who have been to a warzone. I get to sing on stage and prance around, so to be able to tell the stories of people who have lost their lives and gone through serious trauma and lost loved ones, it’s really special for me. Thankfully, my granddad came back from the First World War, he was shot and captured as a Prisoner of War by the Germans, he was released at the end of the war on Armistice Day”. But what Tom finds the most rewarding is the love his dad has for the show; “it’s really nice to be able to do something for dad and that generation,” he says.

While Rolling Thunder Vietnam has welcomed a few new cast members to this season, including Annie Aitken as country girl Sarah, as Tom says, “you don’t want to change a good thing”. With the show returning to previous venues where it was very popular, it’s set for a strong season ahead.

One of the biggest things Tom has been able to take away from the show is the exploration of contradicting emotions from both the audience and as an actor. “The most rewarding thing is the audience’s reaction. At the end of every show, the audience stands up, and they’re wiping tears off their face but they’re cheering and screaming and clapping too. It’s this merge of sad and beautiful nostalgia”.

So where can we find Tom Oliver after Rolling Thunder Vietnam concludes? “Sleeping!” He exclaims enthusiastically. After a stint back home, he’s off to Germany after the production Velvet, a show he originally worked on with Marcia Hines in 2016, begins its own theatrical journey.

Rolling Thunder Vietnam is on at QPAC Concert Hall, 18th & 19th of March, and at The Star Gold Coast for one night only on 21st of March 2020.