TRACEY VIEIRA SHARES HER JOURNEY AT GUESS WHO COMING TO DINNER

Caroline Russo Enterprises have had the pleasure to host another ‘Guess Who’s Coming to Dinner?’ event, and once again this revealed to be another smashing success with spotlight guest, Tracey Vieira. In this fourth instalment of dinner parties, Ms. Russo had created a new partnership with Gusto da Gianni, an award-winning Italian restaurant located in the picturesque Portside Wharf, Hamilton. Around 75 guests who arrived at the venue, indulged in handcrafted Italian bread, fresh seafood and chicken, ravioli and a fine selection of antipasto dishes, as well as provided with a drink on arrival.

Tracey Vieira is the CEO of Screen Queensland and also Telstra’s Business Woman of the Year 2016. Ms. Russo dedicated her evening to exploring Tracey’s life journey, beginning from her childhood memories and ending with the wonderful film projects she had brought to Queensland. For such a young and talented woman, guests could understand Tracey’s career ambitions and determination to making Queensland now one of Australia’s largest film states. Not only has she fulfilled her duties as a Chief Executive Officer, Tracey has a great team in co-productions which assisted in bringing 1.5 billion dollars across the film industry over the last three and half years.

Moving aside from career ambitions, Tracey Vieira also played on guest’s emotions by providing witty stories of meeting her actor husband, Joey, whilst living in America, but also alluding to the troubles of navigating motherhood for the first time. Overall, it was a fantastic insight into her life and her professional journey. 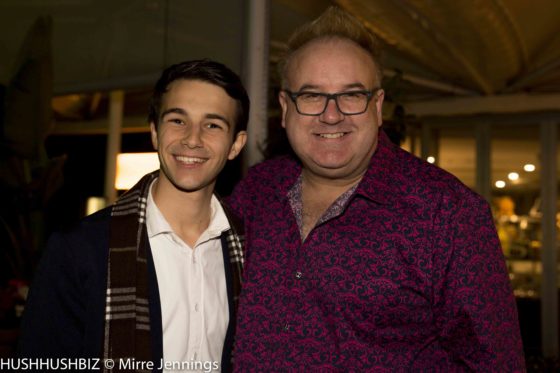 Towards the end of the evening, Caroline Russo Enterprises organised a large selection of raffle prizes that were kindly donated by her sponsors, with all proceeds directed to the Actors and Entertainer’s Benevolent Fund. In total, Ms. Russo and her staff team managed to raise $530! This aids the organisation to continue their wonderful work in helping those in the creative industry.

To cap off the event, Ms. Russo announced and introduced her new business partner, Mr. Jack Sun, who are both formalising a film production company to oversee co-productions in Australia and China, and now have a partnerships in Shanghai and Beijing. Preparation for the next ‘Guess Who’s Coming to Dinner?’ events are already underway, with The Coffee Club entrepreneur, CEO director John Lazarou, to be spotlighted in the near future. If you would like to be on the guest list or notified of similar events, please email [email protected]