WHAT TO WATCH THIS HALLOWEEN? 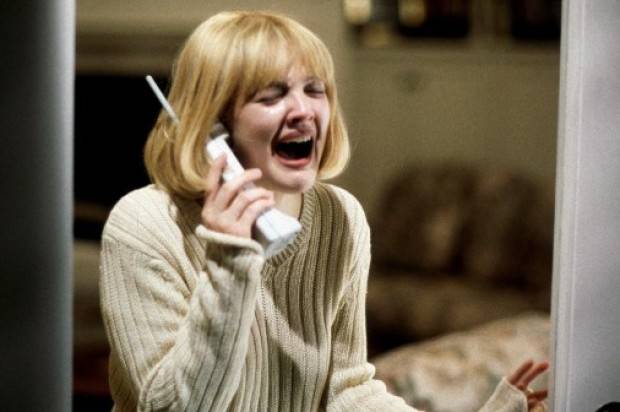 Many believe that John Carpenter originated the slasher with ‘Halloween’ in 1978, but four years prior director Bob Clark had his way with a group of sorority girls in the chilling ‘Black Christmas’. Though the violence is mostly off-screen, and therefore might seem lame in comparison to the more graphic offerings in recent years, this festive-set chiller still gets under the viewer’s skin thanks to the ambiguity of its infamous ending and subtle set pieces that rely more on atmosphere than gore.
MOST HORRIFIC MOMENT: Utilizing the myth detailing the call coming from inside the house, a lengthy phone conversation between the sorority girls and the mysterious Billy is one you wish they had let the machine answer instead.

It’s hard to believe that Wes Craven’s re-invigoration of the slasher genre is approaching its 20th anniversary as, dated cell phone references aside, ‘Scream’ still holds up as one of the scariest and funniest horror movies to date. Both a sly parody of the genre and an effective entrant on its own accord, Craven (R.I.P.) and screenwriter Kevin Williamson masterfully crafted a whodunit mystery in the guise of a teen slasher with its bevy of potential victims and suspects openly discussing the genre clichés they found themselves in.
MOST HORRIFIC MOMENT: Is there really going to be any other moment mentioned other than the film’s opening 10 minutes where our Ghostface killer toys with an unsuspecting Drew Barrymore? Still one of the most terrifying moments captured on screen.

THE REMAKE THAT DOESN’T SUCK: THE TEXAS CHAINSAW MASSACRE (2003)

While most horror aficionados balk at the very thought of one of their precious titles receiving modernised treatment for a new generation of cinema goers, occasionally the Hollywood bigwigs so desperate to make a healthy coin manage to take a step in the right direction, and with ‘The Texas Chainsaw Massacre’ they succeeded. The original is still a brutal masterpiece, and will always be held sacred due to it introducing us to the nightmarish figure that is Leatherface, but there’s nothing wrong in the old co-existing with the new, and director Marcus Nispel treaded respectfully when he aimed to bring Leatherface into the 21st century. The tension was palpable, the effects were practical, and Jessica Biel made for one hell of a horror heroine – all in all, a remake genre fans shouldn’t turn their noses at.
MOST HORRIFIC MOMENT: The effect the slamming of a door has as Leatherface drags his first victim away is something best viewed.

It’s cheesy, questionably acted, and clichéd to the core but that’s what makes this Aussie slasher so much fun! Adopting an 80’s movie mentality ‘Charlie’s Farm’ is designed for crowd viewing as scoffing at the actions of the stereotypical victims-in-waiting only ramps up the enjoyment factor of this deliriously nasty film. The creation that is Charlie is enough to rattle even the most seasoned of horror lovers, and though the film takes its sweet time in getting to the bloodbath, once it arrives – it doesn’t stop until the bitter, bloody end.
MOST HORRIFIC MOMENT: A skinny dip for two unfortunate visitors will leave male viewers gasping for air.

This one slid under the radar when it was released in cinemas earlier in the year, but I suspect its DVD shelf-life will be substantial as this ever-so-subtle but massively creepy film has “cult status” written all over it! What you don’t know about ‘It Follows’ will only benefit you as it taps into that primal fear of death being literally inescapable.
MOST HORRIFIC MOMENT: Group trip to the beach. Enough said.