JOHN LENNON Strawberry Field world premiere by Caroline Russo | on September 8, 2014 | 0 comments | in Theatre | Like it Mark David Chapman, who appeared before a parole board last week for the eighth time, said he was an idiot for choosing the wrong way for glory.

The transcript of his latest bid for freedom has now been released by America’s Department of Corrections which provides a telling insight into Chapman’s mind.

“Many, many people loved him. He was a great and talented man and they are still hurting,” Chapman, now 59, told the three man panel. When asked about his views of the day he shot Lennon he said: “Incredible planning, absolutely, incredible stalking. The thoughts subsided for a while. Then they started building again, and I made plans to come once again to New York and find him and kill him.”

Chapman was denied bail and will continue serving his 20 years to life sentence in solitary confinement at New York’s Wende Correctional Facility. He will go before the Parole Board again in 2016.

A World Premiere Tribute to Lennon will open this week at the Studio Theatre & Café in Morningside. “Strawberry Field” is a multimedia depiction of the Beatle’s life and career. Original interviews with Managers, his first wife Cynthia, original drummer Pete Best, friends and colleagues, will take audiences from his birth in war torn England, through to that tragic night outside the Dakota Building in New York.

Relive the Hits of Lennon including Starting Over, Imagine, Instant Karma, Beautiful Boy, In My Life & Whatever Gets You Through The Night!

More than a dozen songs from his solo career will be performed live on stage by Isaac Tibbs. An accomplished vocalist, Mr. Tibbs has played such characters as Bobby Strong in “Urinetown The Musical”, Black Midas in “Black Midas”, “Westside Story”, and Sonny Malone in “Xanadu. The Musical”, among others. 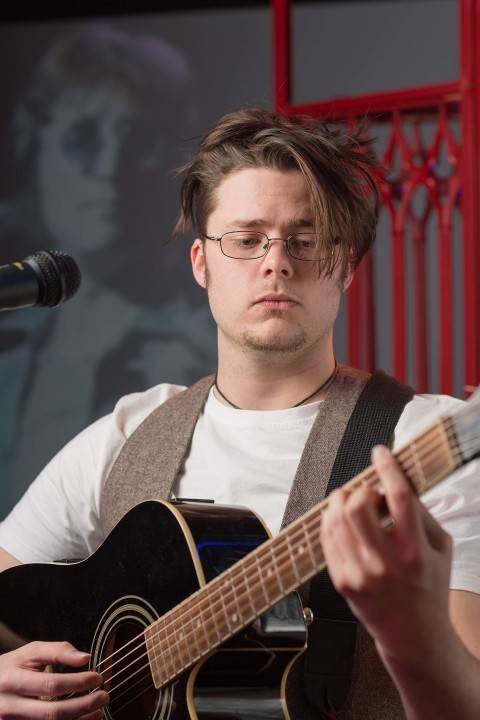