WYRMWOOD: ROAD OF THE DEAD LAUNCHES IN AUSTRALIA

Australia ROAD OF THE DEAD WYRMWOOD zombies by Caroline Russo | on January 30, 2015 | 0 comments | in Interviews | Like it

WYRMWOOD: ROAD OF THE DEAD LAUNCHES IN AUSTRALIA
Written and interview by Jackie Smith
Filmmaking is no easy feat, as the Roache-Turner brothers discovered when they embarked upon making their first feature film, Wyrmwood: Road of the Dead.
The film sees Barry (Jay Gallagher) take on an army of zombies after a comet dissolves over Earth, infecting people with a fatal poison which turns them into methane-producing zombies. Now he must fight to survive, before the apocalypse takes him. With the help of his zombie-whisperer sister, Brooke (Bianca Bradey) and friends Benny (Leon Burchill) and Frank (Keith Agius), he just might manage it.
Four years ago, Australian filmmakers Tristan and Kiah Roache-Turner set about making a zombie film like no other. Inspired by films they grew up watching, not only did these first-time film makers embark on making the film they wanted to see, they also were keenly aware of the fans expectations. ‘We’ve taken Dawn of the Dead and melded it with the visual aesthetics of Mad Max. That’s a look nobody’s ever seen before,’ says Kiah Roache-Turner, who directed and co-wrote the film with his brother. It would appear that this is a film of firsts. As well as being the brothers’ first feature film, and their fusion of Mad Max and Dawn of the Dead, it is also the first Australian film to light a stuntman’s head on fire. Though this is perhaps not something about which they should necessarily brag, it does make for one hell of a fun fact. ‘That one wasn’t even anything that we planned. We got a stunt co-ordinator, got a stunt team and did the stunt. We just heard on set that apparently it hasn’t been done before in an Australian production. We weren’t trying to get out there and break any records,’ producer and co-writer Tristan Roache-Turner says.
Truthfully, the statistics of this film is what really makes it admirable, and a true declaration of the filmmakers’ love of cinema. Originally, it was estimated that film would be wrapped within six months, with a $20,000 budget. In the end, it took four years and $150, 000. Cast and crew members, who were not paid up front, joined the project by word of mouth. An average day on set lasted between 10 – 12 hours, with the occasional14 hour day thrown in for good measure. ‘As a filmmaker, you think you just make a film and that’s it. You do a few interviews and you’re done. I had no idea how difficult it is to make a feature film,’ Kiah says. 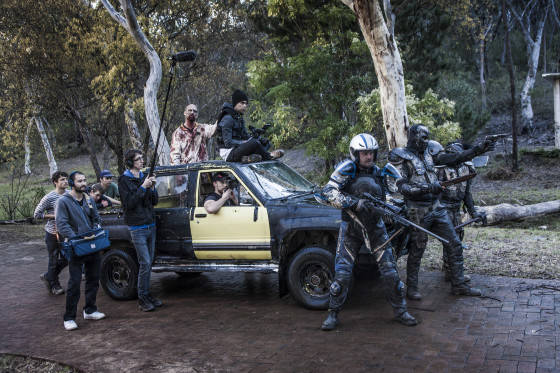 Even with such a low budget, the Roache-Turners were committed to producing a visual feast for viewers, particularly zombie and horror fans. ‘If you’re going to do just another zombie film, forget about it, you have to do something different,’ Kiah says. They enlisted the help of some of the best in the business, such as special effects and makeup co-ordinators, Gavin Kyle and Lisa Cotterill, who the filmmakers describe as ‘disgustingly talented’.
It is also the fans’ dedication to the project that sees Wyrmwood released this year. Within a day of uploading the film’s teaser trailer to YouTube in 2012, they had 10, 000 hits. Now they have over 70, 000, and boast over 10, 000 likes on Facebook. Crowdfunding raised $50, 000 for the project’s completion, for which the filmmakers are eternally grateful. ‘[Without it] I reckon we’d actually still be in production. We’d still be going … We’d have probably another year or two of post-production,’ Tristan says.
Following such a great initial response it would seem that Wyrmwood is a film destined to bring great cinema back to Australia, and as first time filmmakers, the brothers couldn’t really ask for any more support to do so. ‘A lot of people don’t go to the movies to watch Australian films, so it’d be great to actually make a film that got people involved and got people wanting to see more Australian content on the big screen,’ Tristan says. Though their future projects may not see them working on a zombie movie for a while, they are keen to stay within genre films, such as ghost and fantasy, before branching out to more serious films.
Wyrmwood: Road of the Dead has an Australia-wide premiere at Moonlight Cinemas on February 6th 2015, before being played in select cinemas for one night only, on February 13th 2015. Distribution has also been secured for the US, New Zealand, Canada, the UK and Germany, with many more to follow.