Executive produced, directed and written by Tyler Perry, the series follows a family whose world is turned upside down when their nephew, Young Dylan (Dylan Gilmer), an aspiring hip-hop star, moves in unannounced.

Dylan’s grandmother Viola (Aloma Wright) realises that raising her grandson is too much to take on, so she decides to send him to live indefinitely with her affluent son Myles Wilson (Carl Anthony Payne II), his wife Yasmine (Mieko Hillman) and their two kids Rebecca (Celina Smith) and Charlie (Hero Hunter).

Suddenly, the Wilson family household needs to adapt as lifestyles clash between rising hip-hop star Young Dylan and his straight-laced cousins.
From Dylan giving Rebecca and Charlie lessons in “swag” and street smarts, to learning that even rappers have rules in the Wilson house, Tyler Perry’s Young Dylan follows the hilarious hijinks this family faces as they try to get on the same beat. 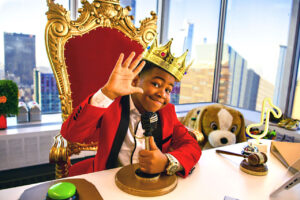 Star of the series, 11-year-old Dylan Gilmer, was handpicked by Perry himself after he saw the young rapper’s performance on Nickelodeon’s new series All That, which Gilmer’s friend and avid supporter, Ellen DeGeneres, helped him secure, following countless performances on The Ellen DeGeneres Show.

Perry surprised Gilmer with news about the exciting new role during an interview on The Ellen DeGeneres Show alongside DeGeneres, his self-proclaimed ‘biggest fan’.

Tyler Perry’s Young Dylan premieres Mondays to Thursdays at 5.30pm from Monday, 31 August, to Thursday, 17 September, on Nickelodeon (Foxtel #701 and Fetch #252) and is also available to stream on Foxtel On Demand, or the Nick Play App.