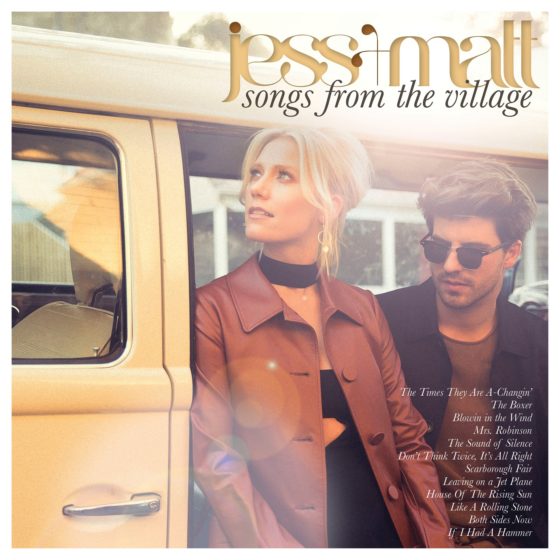 Sydney’s mesmerising duo, Jess + Matt, (Jess Dunbar and Matt Price) have announced they will release their forthcoming album, SONGS FROM THE VILLAGE on April 27, 2018, via Sony Music Entertainment Australia. The record is an earnest collection of iconic songs that heralded the folk revolution, honouring celebrated artists, Simon and Garfunkel, Bob Dylan, Joni Mitchell and more, through captivating and delightful renditions. Pre-order the album NOW!

To preview the album, Jess + Matt have shared the first track from the record, ‘The Times They Are A-Changin’. Buy or stream the track HERE! The single is a stunning tribute to Bob Dylan’s 1964 anthem, with the stellar duo delicately honing the classic song with their trademark vocal harmonies.

“It’s 50, almost 60 years later, and these songs are just as influential as ever, and a lot of the messages – in songs like ‘The Times They Are A Changin’ – calling for equality, in this modern world it feels more relevant than ever”, Price explains. “It was interesting coming back to those songs and seeing how they stood the test of time, and that the messages have come back around”.

The track gives audiences an endearing insight into the music on the SONGS FROM THE VILLAGE record. The album treasures simplistic melodies and expressive storytelling, gorgeously propelled and angelically lifted by Jess + Matt’s warm tones and rich harmonies. The pair harness a rare musical ability to transcend time, resonating a nostalgic presence through each song on the record. Check out the full track listing for SONGS FROM THE VILLAGE below.

Taking on a canon of songs made unforgettable by the 1960s folk revolutionaries was no easy task. But for Dunbar and Price – the likable couple who rose to fame by placing third on The X Factor in 2015 – there was no question but to shift gears from pop charting singles, ‘Nothing Matters’ and ‘Bones’ , to the music that was in their heart and soul.

The creation of the album took the duo on a profound pilgrimage. Jess + Matt retraced the steps, and visited the old stomping grounds of folk music’s greatest pioneers, which inspired the organic production, and shaped the heartfelt sentiments transparent on the record. The couple hope that the voices of one generation, can be passed on to another, at yet one more tumultuous time around the globe, where the songs can inspire change.

Jess + Matt are honourable Destination NSW Ambassadors, recently invited by the Australian Government and Tourism Body Destination NSW,to travel to Hong Kong, Shanghai and Beijing, to perform their charming single ‘Sydney to Me’ , which shares the delights of Sydney through song. Returning to our local shores this May, Jess + Matt will hit the road as special guests on the Rick Price & Jack Jones Australian Tour 2018. To keep up to date with all touring and ticketing information, click HERE!