John Jarratt to direct and act in GC film Stalkher 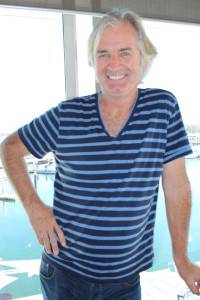 Whats the Buzz in Film world.

John Jarratt is set to make a film on GC.

In Town this week on the Gold Coast at Fellini Restaurant Marina Mirage  for a catch up on some film biz was Australian and now International actor John Jarratt. Joined by his partners in the company OZPIX  Kris Maric and Craig Kocinski  with their new project film STALKHER.

Former Village Roadshow and Disney Australia Managing Director and now Chairman of the AFI Alan Finney is on board as the Executive Producer .
The project has been likened to an Aussie Misery meets Who’s Afraid of Virginia Woolf? This has been written by Kris Maric. Also starring leading lady Kaarin Fairfax (3 times AFI Nominee).
Set to have a great all Australian soundtrack.The project has received great industry support and is set to shoot in the Gold Coast late this year/early next year.The project has already secured theatrical distribution with The Backlot Studios.
Meanwhile John Jarratt  is going off to Venice Film Festival for the festival debut of the highly anticipated Wolf Creek 2, which is to release in Australian Cinemas in February 2014.