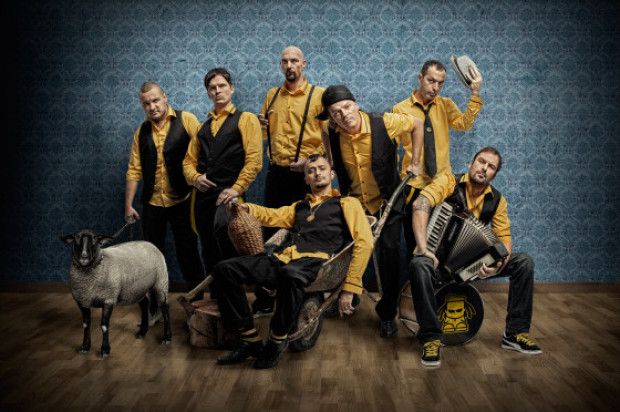 1.  How did you all meet and form the band in the beginning stages?

DK: There are only two classic rock’n’roll biography variants for band creation: first one is that guitar player and singer meet in elementary school and form a band with two more less talented friends; the second one is that bass player put out an ad searching for band members and other guys show up for an audition. After they throw out original guitar player due to creative differences they realize that younger brother of drummers mother-in-law is very talented and they invite him in. Unfortunately, our band doesn’t have such biography-friendly history. We were in two bands that split up and unemployed musicians from those two bands got together and formed DUBIOZA KOLEKTIV.

2. Who thought of concept of your music or was this just drawn together after meeting up?

DK: From the beginning, we didn’t try to define our musical style or try to fit it into specific genre niche. We never wanted to have fixed concept for our sound since that radically narrows your manoeuvering space. We delete everything we’ve done previously and start creating ideas for new album from the scratch. When we find a topic for the lyrics – we are trying to find best musical background for it and this is why we sound very eclectic in the end. Also, we are trying to keep Balkan touch to our sound so you can hear loud and clear where we are coming from… Basically, we follow a rule of American martial arts movie “No Retreat – No Surrender” where our idol, Jean Claude Van Damme, has very good support role.

3. Who is the main creative writer and where did the main influences come from?

DK: We have internal contest for literary award in DUBIOZA KOLEKTIV, with attractive money prize. This is something that makes us write all the time so we qualify for award and get the money. This is the main source of inspiration.

4.  What backgrounds do most of the band come from?

DK: We are all coming from working class families. Our parents are workers and peasants so we are all children of proletariat. We try to keep the ideas of equality and self-management in these times of violent neoliberal capitalism.

5.  When you first performed live did you expect to gain the popularity that you have had over the years?

DK: During our first live performance we didn’t have much time to contemplate about our future because we were too occupied with trying not to miss a chord or beat.

6.  Is this the first time to Australia and what can we see you guys do on stage here ?

DK: This will be our first time in Australia and we are really looking forward for this experience. Instead of describing our shows, we have one advice for all the people who show up – please bring extra set of clothes so you can change after the show, because you will be soaking wet and, if it will be windy outside, you could catch a cold. All visitors are strictly advised to dance, sing, nod their heads to the beat, make loud shouts of approval between the songs and to repeat “We want more!” at the end of the show. As simple as that.

7.  You have released so many albums what been the most fun to do so far and well received?

DK: Creating our latest album “Happy Machine” was probably the most interesting experience because we wrote it and recorded it at different places, collaborating with very interesting people. Album features a lot of guests like Manu Chao, Benji Webbe from Skindred, La Pegatina, Dzambo Agushev and all of this happened without stress.

8.  How long does it take to work on new material?

DK: We are constantly on the road and last 3 albums were created in the van, hotel rooms, backstages of clubs and festivals. As well, we are constantly working on new songs as well. When we collect enough ideas and get back Home for a little bit – we lock ourselves up in the studio and try to record as much as possible. It is constant chaos and there are no rules or method to it. We are so used to this that we don’t dare slow down the tempo.

9.  With all touring what has been the most stand out for you all?

DK: After 5 years of continuous touring, the biggest stand out for everybody in the band is to come home and eat some nice home cooked food.

10.  What are some of the things you like to do when in Australia besides meet our local animals?

DK: First of all, we will make thorough inspection of your refreshing alcoholic beverages, with special attention paid to different beer types. We will also use this opportunity and try to see Santa Claus in his summer outfit.