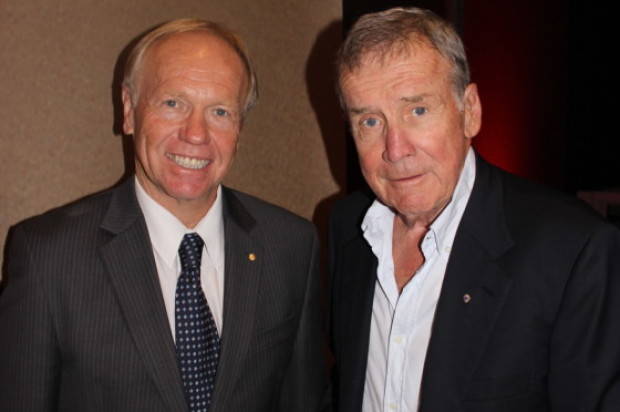 The NACO Board, together with its interested and allied partners, made a number of very important submissions to various government reviews, including to the Senate Environment and Communications Legislation Committee, to the Copyright Legislation Amendment (Fair Go for Fair Use) Bill 2013 and to the ALRC Discussion Paper.
As Michael indicated, NACO has been working as a part of a unified content industry group to commission research and develop strategies and messages to deter piracy and promote and protect the creative industries.
He mentioned some very key figures:

I have been working very closely with the Exhibition Industry’s leadership group of Graham Burke and Terry Jackman (I wish I’d had these two guys in my Cabinet when I was Premier – we could have achieved anything) to take the developed messages to all sides of Government.
The numbers I just cited emphasise the importance of the creative industries to the economic and cultural prosperity of Australia.
The creative industry’s ability to use the internet to get a reasonable return on its substantial ongoing investment, impacts our opportunities to continue releasing quality entertainment content. Like any other business, if a product doesn’t produce a return on its investment – in this case as a result of rampant
online piracy – then fewer investors will be prepared to risk funding the next Red Dog, the next Railwayman or the next Mia Wasikowska. We’ll all miss out.

Michael mentioned the need for urgent legislative reform to protect both Australian consumers and businesses from illegal overseas websites. Well let me strip away the well honed myths about these websites. The criminals who operate them are not in the business to promote innovation, or freedom of speech, nor are they in the game to protect the freedom of the internet. Those behind piracy sites are only in it for the money, primarily revenue from advertising (gambling and porn sites), and they have their snouts well and truly stuck in the money trough. Disabling access to websites whose primary purpose is facilitating unauthorised access to copyrighted content will help dry up the money trough. If the legal risks start to outweigh the illegal profits then fewer players will pursue this criminal route.
And it can be done. We are not asking the Australian Government to be pioneers – rather to catch up with other parts of the world. There are currently 15 countries in Europe which have legislation allowing content owners to obtain judicial court orders to block illegal websites that monetise access to copyrighted content.

The United States and France provide excellent examples of both voluntary and legislated codes of conduct between rights owners and ISP’s that address P2P file sharing through an educational focused copyright alert system.
Australians love great movies and TV shows, but are we loving them to death. I am ashamed to say that per capita Australia has the highest illegal downloading rates in the world.
Something needs to be done to address this.
This Convention is my last as Chairman of NACO. I have thoroughly enjoyed the three years I have been Chairman and have enjoyed these Conventions enormously.

My last act as Chairman will be to hand over the reins to Terry Jackman. There is a certain irony in this. Many years ago I had the pleasure of appointing Terry to the role of Chairman of Tourism Queensland, a role he fulfilled for 9 years. And now, I am delighted to announce that Terry will become the Chairman of
NACO. As with Queensland tourism all those years ago, I know that cinema exhibitors are going to be in the most capable set of hands.