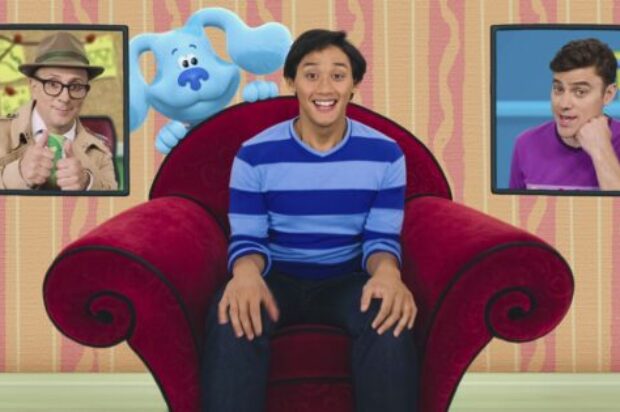 Pull up your Thinking Chair and grab your Handy Dandy Notebook, because hit preschool series Blue’s Clues & You!, a remake of the 90s’ classic Blue’s Clues, is shaking it’s way on to 10 Shake from Monday, 23 November at 8.00am.

Airing weekday mornings, Blue’s Clues & You! invites our littlest audience to join CG-animated Blue and new host Josh Dela Cruz, on clue-led adventures to solve a puzzle in each episode. With each signature paw print, Blue identifies clues in her animated world that propel the story and inspire the audience to interact with the characters.

Excited to be part of a show for kids that encouraged participation, host Josh said: “It’s more of a transfer of power and authority to the home viewer, which is something as a kid, you don’t usually get. You’re usually told to be quiet and listen.

“Our show gives us the opportunity as kids, to voice our opinions and make mistakes, because that’s a part of learning.”

The original Blue’s Clues series launched in 1996 to critical praise from educators, parents, and preschoolers for its unique interactivity that helped change the way kids watch television. The landmark series also raised the bar in preschool television by exploring advanced subject matter such as sign language, geography, physics, emotions, and anatomy.

With fandom already foot, the series premiere will coincide with the launch of the first toy range, an adorable animated plush Blue that raises her ears and barks fun phrases from the show. Available exclusively to Big W online (RRP $45) Peek-A-Blue is the perfect companion to help solves clues.