2018 Premier’s Anzac Prize Minister Grace Grace QUEENSLAND by Caroline Russo | on January 15, 2018 | 0 comments | in Daily News and Updates | Like it 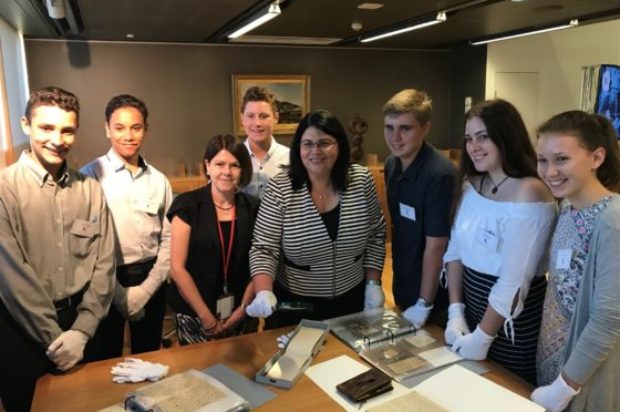 Ms Grace, representing Premier Anastacia Palaszczuk, met with the prize winners today at the State Library of Queensland at which students are participating in a two-day Young Historians’ Workshop to prepare for their trip to the site of the Western Front in April.

“This year marks 100 years since the Battle of Villers-Bretonneux on Anzac Day in 1918. The students will have a once-in-a-lifetime opportunity to attend the historic centenary commemorative dawn service at the Australian War Memorial at Villers-Bretonneux.

“They also will be among the first visitors to the new Sir John Monash Centre Australian National Memorial, which has been established at Villers-Bretonneux as a lasting legacy of the Centenary of Anzac.

“Through the Premier’s Anzac Prize, students have the opportunity to honour the Anzac tradition in a personal way by researching and writing about service people from their local area, or who may have enlisted at the same age as they are.

“This award has effectively engaged our younger generation in understanding the Anzac tradition and how the Anzac spirit is instilled in the Australian way of life.”

Ms Grace said the Premier’s Anzac Prize had given more than 100 participants a life-changing experience since its inception in 2013.

“The program has had a profound influence on its participants and the wider community,” she said.

The judging panel for the Anzac Prize included representatives of the Australian Defence Force, Returned and Services League, history teachers and the Department of Education.

“I thank all members of the judging panel for their time and expertise and the two teacher chaperones for the part they will play in supporting students during their journey,” she said.