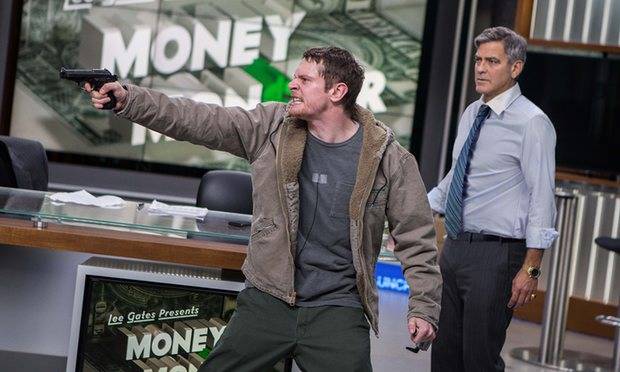 As a director, Jodie Foster hasn’t always gotten it quite right so to say ‘Money Monster’ is her strongest effort yet isn’t exactly high praise.  That being said, her latest is a perfectly serviceable vehicle which is competently directed, well-acted, and layered with suitable tension that holds its weight for the brisk 100 minute runtime.

Deriving its title from the stock-market based TV show hosted by the gaudy Lee Gates (George Clooney), the film wastes little time in setting up its simple yet effective concept where Gates’ show is hijacked live on air by a desperate young man, Kyle (Jack O’Connell), who has lost his hefty inheritance on a stock tip backed by Gates.  Wanting to know how and why a supposed system “glitch” caused company Ibis Clear Capital to drop $800 million overnight, Kyle’s helplessness is evident as he rigs Gates up with an explosive vest and demands to know the reasoning behind a stock crash that no one is willing to own up to.

As Kyle’s pleas garner him increasing attention and Gates’ safety grows considerably grim with every wasted minute, TV director Patty Fenn (Julia Roberts) remains the voice of reason as she simultaneously feeds Gates through his ear-piece and constantly keeps her steady finger on the pulse of the situation.  As the plot moves firmly forward it’s easy to dismiss a great deal of the action taking place given how unlikely the logistics ultimately are but when everything is as intricately entertaining as this, you don’t really mind.

To say that George Clooney and Julia Roberts deliver without fault is rather purposeless but both supply enjoyable performances with Clooney effortlessly showcasing both Gates’ charm as an extrovertly confident host and the realities of his dark, flawed existence.  Roberts’ authority shines bright throughout and the chemistry between the two is evident.  Jack O’Connell (so effective in Angelina Jolie’s ‘Unbroken’) is riveting to watch as he evolves from a man with no options to one who is determined to run the situation around him.  Dominic West as the smarmy CEO of Ibis Clear Capital and Caitriona Balfe as the poised company spokesperson both provide ample support.

‘Money Monster’ is ultimately a film that is far beneath the talents of the Oscar winning trio (Clooney, Roberts, Foster) that are headlining it, but there’s no harm in firm filmmaking that succeeds as a means to entertain its audience; a feat this enjoyable thriller pulls off successfully.