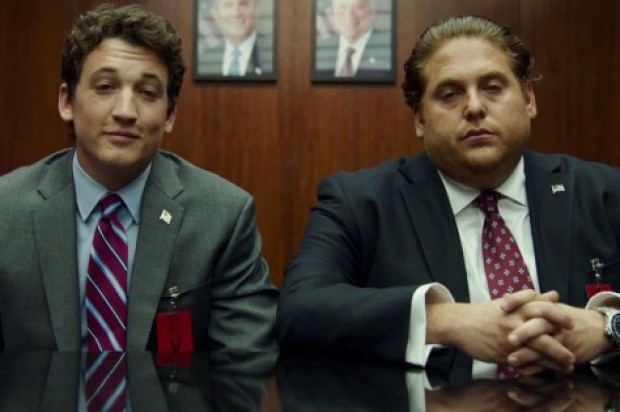 Whether it was a case of running out of ideas or wanting to move away from comedy, Todd Phillips’ conclusion to his ‘Hangover’ trilogy indicated he was gunning for more serious material. Marking a significant shift in direction, ‘War Dogs’ is a far more ambitious and successfully executed true-crime drama than one would expect from a filmmaker with such titles as ‘Road Trip’, ‘Old School’ and ‘Starsky & Hutch’ amongst his credits.

One of those true stories that had it not been based in fact would be deemed unbelievable, the film focuses on a significant period in the lives of twenty-somethings Efraim Diveroli (Jonah Hill) and David Packouz (Miles Teller), two childhood friends who drifted apart over the years thanks in large part to Efraim’s negative influence. Reuniting at a time when their lives couldn’t be more opposing to one another – Efraim’s unattached and evidently wealthy, David is struggling to provide for himself and his pregnant wife (Ana de Armas) – Efraim’s business of supplying ammunition to the troops in Iraq through successful bids on government contracts proves too inviting to David, and within weeks of working together their business AEY (no, it doesn’t necessarily stand for anything) is thriving.

Given that these two young men were essentially merchants of death, it’s wise on Phillips’ part to make the duo not specifically likeable, and though their actions are often amusing, the film never justifies their behaviour; think Scorsese’s treatment for DiCaprio and crew in ‘The Wolf of Wall Street’. Of the two, it’s Teller’s character that evokes the most sympathy as you sense his desperation at having to finance a lifestyle that now includes a child, and the actor’s transition from everyday working-class man to a creature of greed is an organic one. As solid as Teller is though, ‘War Dogs’ ultimately stands as a showcase for Hill, who continues to defy expectation in his ability to play beyond comedy. With a sleazy Los Angeles spray-on tan and a heftier build than usual (the actor gained significant weight for the role) Hill is an absolute wildcard as the morally bankrupt Diveroli who relishes the opportunity afforded to him to alter his personality ever-so-slightly to appease those he’s in business with; it’s an extremely vile role, and Hill is more-than-worthy of accommodating this trait.

Thankfully not overstaying its welcome by delving into any details unnecessary to further the story, ‘War Dogs’ should come as a surprise to its audience. Despite its advertisements being heavy on the funnier, more manic moments Phillips assuredly handles, the film tackles its serious subject matter with aplomb and vigour.