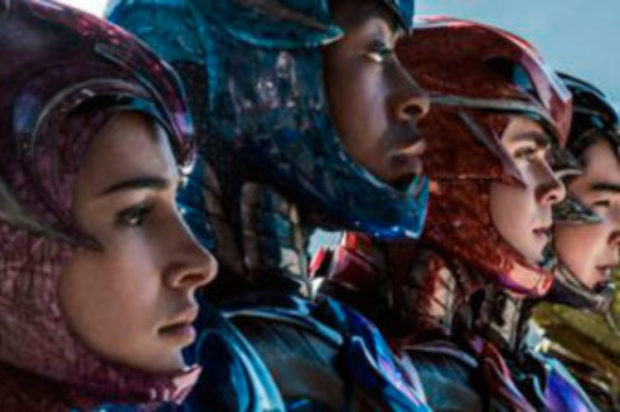 There’s no denying that the 1990’s television series ‘Mighty Morphin’ Power Rangers’ is an awful slice of entertainment. It’s difficult to defend the show when watching it back now as its camp quality is more evident than ever to the hordes of those in their late twenties and early thirties – essentially the prime age group for when the original show was at its peak – but it was a phenomenon nonetheless, and the power of nostalgia can be often quite challenging to resist, hence the revisitation that is ‘Power Rangers’.

Despite its fanbase, the 2017 incarnation of ‘Power Rangers’ opts to present itself as a familiar tale for a brand new audience (at least initially) as it begins with an alien-like Bryan Cranston (who coincidentally enough provided voice work on the original series) crawling out of spaceship wreckage to battle former-ranger-turned-villainess Rita Repulsa (Elizabeth Banks, chewing the scenery so much she’s at risk of gluttonising). This sequence immediately recalls the style of the television show with the acting cheese laid on thick and the questionably-budgeted set design, but once the film introduces its Power Rangers-to be it proves a surprisingly solid venture.

Through a series of situational conveniences the titular heroes-in-waiting are brought together due to their similar outcast nature, most of them predominantly meet during a weekend detention session at their high-school, and the script from John Gatins (‘Flight’) spends an alarming length of time in detailing the characters beyond their stereotypical appearances. R.J. Cyler as the nerdy Billy Cranston is perhaps the only actor who makes a lasting impression due to his naturalistically charming performance, but his fellow rangers all deliver on their character descriptions with the Zace Efron-esque Dacre Montgomery succeeding in the nice guy jock routine and Naomi Scott making her former mean girl more likeable than she should be; Ludi Lin and Becky G round out the Rangers with the latter representing the LGBT community with a subtle wink.

Once we learn enough about each respective ranger’s personal life, and the talkative robot Alpha-5 (voiced by Bill Hader) informs them of their planet-saving fate, director Dean Israelite (‘Project Almanac’) spends a surprising amount of time in getting to the inevitable showdown between the Rangers and a re-born Rita and her army of rock-formation creatures. Once our fashion catalogue-ready team of players have morphed into the Power Rangers, the film completely abandons the relative realism it was going for in the 90 minutes prior with a wild, over-the-top finale that feels perfectly in-tune with the original material; there’s even spots reserved for the theme tune and the classic “It’s morphin’ time” line that feel more as additives for long-time fans than an organic inclusion.

Whilst the film dwindles in quality in its final 30 minutes, this is ultimately where ‘Power Rangers’ shines as it wholeheartedly embraces its campy foundation and runs with it to no end; think the 90’s show on a bigger budget and you’ll have an idea as to what vibe the film strives for. There’s clearly a franchise in the waiting here (a mid-credit sequence at the film’s end alludes to a character introduction for the hopeful sequel) and now that the players have been introduced, perhaps the sequels can save us the unnecessary angst of its protagonists, forego any practicality and simply clasp the nonsensicality that is this brand.