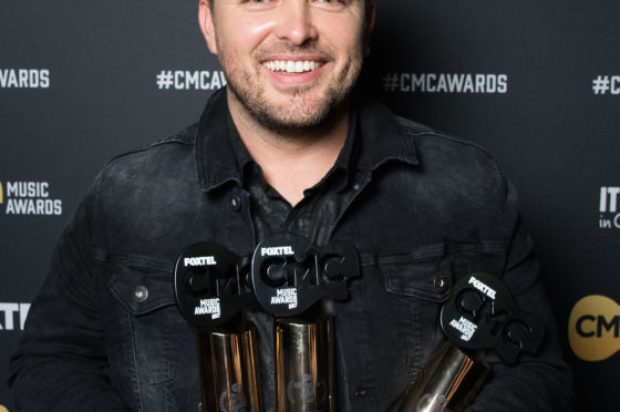 CMC MALE ARTIST OF THE YEAR

AUSTRALIAN VIDEO OF THE YEAR

and part of the ARIA Highest Selling Australian Artist Award

This evening, Foxtel’s Country Music Channel (CMC) announced the winners for the 7th Annual CMC Music Awards 2017 during a LIVE broadcast on CMC from The Star Gold Coast. The Awards are now available to stream instantly on Foxtel Play and will be encored on FOX8, this Sunday March 26 at 2:30pm Qld time / 3:30pm AEDT and on CMC throughout the week fromMonday 27 March at 6pm Qld time / 7pm AEDT.

Hosted by MORGAN EVANS, the 7th Annual CMC Music Awards, the only viewer voted Country Music Awards, allows music fans to vote for their favourite Australian and international Country artists they think deserve to be awarded over eight categories.

Collins took to the stage to perform his award winning single ’Call Me Crazy’, which he co-wrote with Damien Leith, topping off a successful night and year so far with three Golden Guitar Award wins also under his belt. Collins looks sure to shine brighter and is becoming one of Australia’s most exciting country/rock music talents. Collins said: “I still haven’t found the words and probably won’t find the words to show just how special they are to me. These are fan voted and for my fans to rally the way they did and to vote for me – here’s the thing about country music, I think country music fans are fans of every artist and it’s sometimes tough for them to choose who they’ve got to vote for so every single person who voted for me means something to me and to walk away with this three awards is just mind blowing.”

URBAN was also awarded with the ARIA Highest Selling International Album Award for “Ripcord” and thanked his fans and CMC via a video acceptance speech. Urban said: “I feel very proud tonight, thank you. The tour I just had in Australia was the most fun I ever had touring ever, so thank you for everyone that came out and saw us play and for supporting the album. I feel extremely grateful. We tour all over the world and there is always something around me that makes me feel Aussie no matter where I go. I am always going to feel that way and I am very grateful and grateful for these awards”. Music legend LEE KERNAGHAN has earned his place as one of Australia’s leading contemporary music artists who have made a huge impact on country music in Australia. Coinciding with the 25 Year Anniversary of Lee’s debut album “The Outback Club” (1992), the CMC Music Awards this evening celebrated the road paved by Kernaghan by honouring him with theCMC Hall of Fame Award which recognises artists who have had an impact on Australian country music beyond their own.

This year sees a very special album release for Lee via ABC/UMA titled “The 25th Anniversary Album” set for release tomorrow. Kernaghan said: “I want to thank the fans – I can’t call you fans – I call you family because that’s what you mean to me.” CHELSEA BASHAM, the gifted singer-songwriter from the West Australian wheat belt has established herself as one of Australia’s hottest new talents and tonight took out the award CMC Female Australian Artist of the Year which she adds to her three hit singles, a Golden Guitar win and APRA award nomination. Basham said: “It’s an absolute honour and means the most to me out of all the awards because it’s a fan voted award, they’re the people that predict the future of country music. They’re the ones buying the albums and going to the shows and if they believe in me this much to vote for me and give me an award it gives me the encouragement to keep on going because it’s a tough industry and not give up and this is only the beginning.”

Emerging star FANNY LUMSDEN was awarded CMC New Australian Artist of the Year. Lumsden has undeniably made an impression since the release of her debut album “Small Town Big Shot” which earned her a nomination for the 2016 ARIA Award for Best Country Album. Lumsden is one of the new breed of artists bringing a fresh, contemporary stamp to Australian Country Music, having already won the Golden Guitar for New Talent and has been described as ‘a breath of fresh country air’. Lumsden said: “This award is huge, because we’re self managed and we’ve done everything ourselves and to have the support of our peers and the fans out there who voted for us and everyone who’s been sharing this story – it’s fantastic – it’s a really big deal – it’s really exciting”. 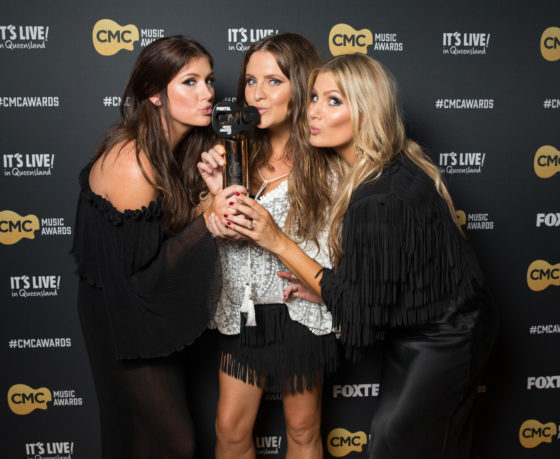 Multi-award winning country music trio THE McCLYMONTS took out CMC Group or Duo of the Year. Throughout their ten year career, The McClymonts have released four studio albums which have received 2x Gold Sales Accreditations, 10x Golden Guitar Awards, 2x ARIA Awards, an APRA Award and CMA Award for Global Artist of the Year. They have released twenty hit singles along the way, and won countless fans and critics as they toured extensively around Australia and the USA. The McClymonts said: “To CMC, we are so thankful for all the Australian content that you play It’s really huge the CMC Award because it’s fan voted. They took the time out of the days to vote for us and that just means so much to us – we’re so lucky, we’re 11 years in, fifth album in, and people still want to hear music and come to the shows. This is our thank you to them – their award but we’re going to keep it. This is for them [the fans]”.

Also handed out tonight the ARIA Award for Highest Selling Australian Artist awarded to ADAM BRAND AND THE OUTLAWS for their successful self- titled album “Adam Brand and The Outlaws”. Adam said: “It’s absolutely amazing. To be able to do something with four of my best mates and to be able to go out on tour with them and to have the fans actually embrace it and enjoy it and then go out and buy the album like they did is a dream come true.”

Kip Moore performed his nostalgic, raw and honest single ‘That Was Us’ from his “Wild Ones” album.

The 7th Annual CMC Music Awards kick off a star studded week in country music with CMC Rocks QLD 2017, Australia’s premiere Country and Roots Festival to follow tomorrow. Now in its epic tenth year and sold out, CMC Rocks will feature performances by Global superstars Dixie Chicks who headline the Festival and who will be joined by a first class international and local performance line up including Little Big Town, Kip Moore, Lee Kernaghan and many more. CMC Rocks QLD 2017 will be held over three days and nights from Friday March 24, Saturday March 25 and Sunday March 26, 2017 at Willowbank near Ipswich and will telecast as CMC Rocks Qld 2017 on Foxtel’s CMC, Wednesday April 12 at 8pm AEST.

The 7th Annual CMC Music Awards broadcast LIVE on Thursday March 23 at 7:30pm Qld time / 8:30pm AEDT on Foxtel’s CMC and is now available to watch on Foxtel’s streaming service, Foxtel Play. Following each broadcast, customers can watch The 7th Annual CMC Music Awards any time via Foxtel On Demand, which is available on internet connected iQ boxes, Foxtel Play or enjoyed on the move via Foxtel Go, Foxtel’s mobile app. Foxtel Go and Foxtel On Demand are included with all Foxtel and Foxtel play subscriptions at no extra cost.