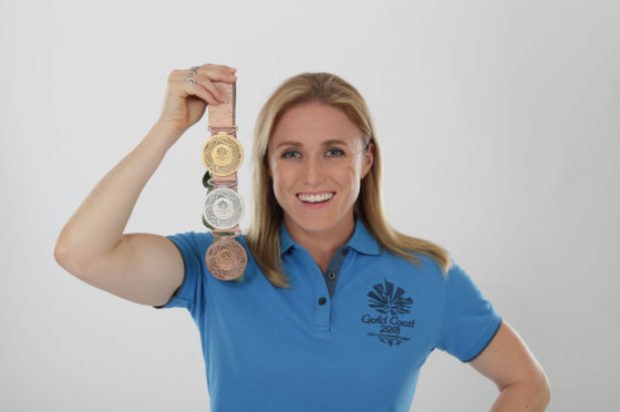 A striking set of gold, silver and bronze medals for the Gold Coast 2018 Commonwealth Games were spectacularly unveiled before 700 guests at tonight’s GC2018 Charity Gala and Medal Reveal at The Star Gold Coast.

The medals were designed by Queensland-based Indigenous artist Delvene Cockatoo-Collins and have been brought to life by the Royal Australian Mint, the official supporter and producer of the GC2018 medals. With a diameter of 63mm, each medal will be minted in the Royal Australian Mint’s largest coin press and inspected individually by hand to ensure the finest quality medals are presented to all Commonwealth Games winners and placegetters. Approximately 1,500 medals will be created for the Games.

GC2018 Ambassador and Olympic and dual Commonwealth Games hurdles gold medallist Sally Pearson OAM had the honour of being the first athlete to lay eyes on and hold the medals in an on-stage presentation with Ms Cockatoo-Collins, who shared her inspiration behind the design of both the medals and ribbon.

“My inspiration was drawn from the Gold Coast coastline, which for many generations, has been a place for gathering, meeting and sport.

“The medal design represents soft sand lines which shift with every tide and wave, also symbolic of athletic achievement.

“The continual change of tide represents the evolution in athletes who are making their mark. Records are made and special moments of elation are celebrated. Although the moment in time may be fleeting, it is forever marked within the shells that are brought upon its tidelines.

“The ribbon represents the woven strand of the freshwater reed, yungair, which is three reeds woven to form a pattern resembling many triangles joined together. This is reminiscent of the South East Queensland and Gold Coast areas.”

“Medals are symbolic of each Commonwealth Games and are the ultimate goal that athletes are aspiring to win.

“The reveal of these striking gold, silver and bronze medals for the Gold Coast 2018 Commonwealth Games is a special and significant moment for the athletes as they can now visualise what they are training and competing for.”

“A medal is the ultimate and much-cherished prize for a Commonwealth athlete; and each athlete’s ongoing commitment and drive to attain them stirs hopes and dreams in all of us.

“They powerfully represent a host nation’s culture, marking the moment when history was made.

“I congratulate the medal designer and producers on an impactful set of prize medals, creating an enduring symbol of the Gold Coast 2018 Commonwealth Games.

“I am sure the athletes will love these medals and provide them with further inspiration and determination as we count down towards the Games in April.”

“We are thrilled with the designs of Ms Delvene Cockatoo-Collins as they reflect the beautiful coastline of Queensland and will be a lasting symbol of our Games.

“With the quality production of the Royal Australian Mint, I am proud that these medals will be presented to the winners and placegetters of our Games next year.”

“Tonight’s unveiling of the medal design is another important step on the road to GC2018 with just 151 days to go before the Games begin.

“As the first regional Australian city to host a Commonwealth Games, we are sure this event is going to be a Games to remember and it’s only fitting the athletes that will be awarded these medals are going to have a beautiful memento of their time on the Gold Coast.

“The indigenous influence with the medal design is outstanding.’’

“It’s an honour and a privilege to be the first athlete to view the medals for next year’s Commonwealth Games.

“Medals are symbols of success and we aspire to have them. Having the opportunity to strive for a gold medal from a Games in my own home town is very special.”

“The Royal Australian Mint is proud to be the official supporter and producer of the Gold Coast 2018 Commonwealth Games Medals, continuing a long-standing tradition of involvement with our nation’s greatest sporting moments.

“Every medal is carefully handled and inspected individually by our highly skilled staff, ensuring that the best possible quality is achieved.

“So many of our team were involved in the production of these medals, from coin designers, product developers, engineers and engravers to die technicians, machinists and production experts making it a truly collaborative effort.”