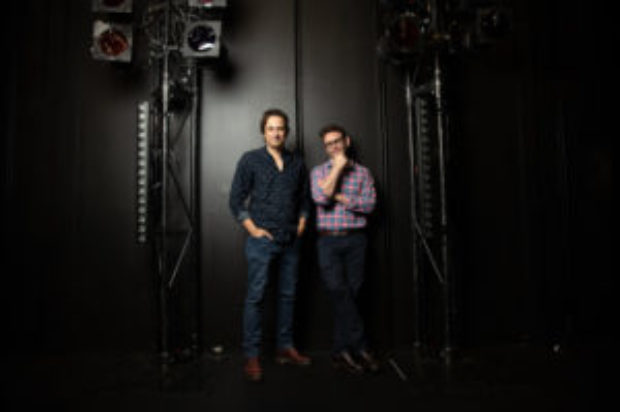 In a huge coup, Queensland Theatre has secured the rights for the world premiere of the stage version of Brisbane-born Australian author Trent Dalton’s breakout mega-hit novel, Boy Swallows Universe.

The announcement comes on the back of a record-breaking four-prize win for Dalton at the Australian Book Industry Awards, with the novel officially becoming Australia’s number 1 book overall, and number 1 fiction book, as measured by Nielsen BookScan last week. On Wednesday Dalton was included in the 2019 longlist for the Miles Franklin Award, Australia’s most prestigious writing accolade.

“We’re thrilled to announce that in 2020, Queensland Theatre in partnership with Brisbane Festival will produce a theatrical version of Trent Dalton’s extraordinary novel, Boy Swallows Universe. The novel is the hottest property in Australian storytelling, deserving every ounce of the praise that has been lavished on it and all of the incredible success it has achieved,” said Strong.

“Moreover, Trent’s book is absolutely ripe for adapting to the stage: featuring larger-than-life characters, an effortless combination of magic realism and crime-thriller, unforgettable set pieces written with a cinematic visual flair, and dialogue that just leaps off the page.

“Boy Swallows Universe has captivated hundreds of thousands of Australians with its arresting portrait of growing up in 80s Brisbane. It has captured the hearts of us all through its story of love’s triumph over the darkest of circumstances. I am more excited about the theatrical version of Boy Swallows Universe than any of the 30 odd shows I have directed for the Australian mainstage. I cannot wait to direct this landmark Brisbane story on a Queensland Theatre stage.”

“Everything about this production is perfect. It had to be staged here. This glorious, complex, sweltering city is in my blood and my blood is in that book. It was the people of Brisbane who took that wild, strange book and ran with it first and that book belongs to them now and this production will belong to them, too.”

He said never in a million years did he believe the story would go from the page, to the stage.

“My goal was a simple one: to see that story put into a hard copy book so I could hand just one copy to my mum, who still lives in the outer northern suburbs of Brisbane, and I could say, “This is why I love you so much”. Now I can take that early-60s warrior woman grandma to a play in the city and she can see some incredible performers under lights telling some of her story and I can lean over to her in the theatre and whisper, “This is why I love you so much.”

He said he saw the theatre as a magical, dark, wondrous place. “I love theatre so much and I love Queensland Theatre,” he said.

“Sam Strong is a theatre genius and I’ve told him he has my blessing to go as big and as ambitious and as creative as his big brain can take him. I’ll be Matty Bowen to his Johnathan Thurston, supporting him all the way. But, like any good Queensland fullback, I’ll know exactly when to step out of the way,” he said.

He said he can imagine the opening night feeling already.

“Brisbane will be in full sunshine glory, purple jacarandas will be blowing in spring breezes, the Broncos will be in the finals and I’ll be somewhere in that beautiful theatre with a packet of barbecue Samboys saying, ‘How the hell did I ever get so lucky?’.

“Just to see these so often overlooked Brisbane places that are so dear and connected to me – Bracken Ridge, Darra, old Boggo Road Gaol – put up there on stage is deeply moving to me. There are countless people that I love, heart and soul, out there in those suburbs who might be able to come to that play and say, ‘Yeah, that’s my world, that’s my Brisbane’, and I’ll be right there beside them screaming, ‘Hell yes, ain’t it glorious’. 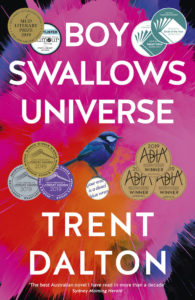 Sam Strong said adaptor Tim McGarry was the first playwright out of the blocks for the book based on his passion and affinity for the story.

“Tim McGarry brings his impressive experience with creating new Australian stories and especially adaptations of novels to the task of adapting Trent’s book. Tim has already written an incredible adaptation of Trent’s extraordinary novel and I can’t wait to work with them both to bring Boy Swallows Universe to life in the theatre.”

McGarry said he read the book in less than 24 hours while on holidays in far North Queensland.

“I could barely put it down. There were times I could barely breathe. I was completely captivated by Eli Bell, his journey, his charisma, his desperation to try and better understand the dark world he inhabited. I was captivated by the magic and wisdom of August. I found the characters so richly rendered. The complex world Trent created just leapt off the page. Collaborating with Sam Strong and his team on this particular work is mind-blowingly exciting for me.”

Strong said Queensland Theatre was thrilled to be partnering with Brisbane Festival. “Artistic Director Louise Bezzina has a passion for Brisbane stories and working with Brisbane companies, so it makes perfect sense that our two organisations come together to co-produce the most exciting Brisbane story in decades.”

“I am thrilled that as part of my first Festival as Artistic Director we will co-present the stage adaptation of this enormously celebrated and popular book in partnership with Queensland Theatre. Brisbane Festival is deeply committed to telling the stories of our great City and this new production will be a wonderful centrepiece of the 2020 program,” she said.

Published in July 2018, Boy Swallows Universe has now sold over 160,000 copies in Australia across all formats and has been awarded several of Australia’s top literary awards, including Book of the Year at both the Australian Book Industry Awards and the Indie Book Awards, the NSW Premier’s Literary Award for New Writer and People’s Choice Award, and the MUD Literary Prize. Rights to Boy Swallows Universe have been sold to 34 English language and translation territories.

TO JOIN A WAIT LIST AND BE THE FIRST TO RECEIVE UPDATED TICKETING AND SHOW DETAIL, click here:

Further updates on the incredible stage adaptation of Boy Swallows Universe by Queensland Theatre and Brisbane Festival will be issued regularly.

Boy Swallows Universe is a captivating coming-of-age story set in Brisbane’s violent working-class suburban fringe, inspired by the real-life events of journalist Trent Dalton’s complicated youth. It tells the story of twelve-year-old Eli Bell, who finds comfort in his extraordinary imagination as a means of escaping from his challenging life with a mute brother, a mother in jail, a heroin dealer for a stepfather and a notorious crim for a babysitter. Surrounded by chaos and with very little moral guidance from the adults around him, Eli sets out on an ambitious suburban odyssey that sees him meet the father he doesn’t remember, break into Boggo Road Gaol to rescue his mum, come face to face with the criminals who tore his world apart, and fall in love with the girl of his dreams. At its core, Boy Swallows Universe is a story of brotherhood and the spark of young love; it’s also the unlikely true story of the formative friendship Dalton shared with Arthur ‘Slim’ Halliday, the greatest escape artist ever confined to Brisbane’s Boggo Road Gaol.

ABOUT THE DIRECTOR
Sam Strong is Australia’s leading Director of new Australian stories. His credits read like a roll call of the Australian canon: classic shows including Storm Boy, Jasper Jones, and The Boys; writing royalty David Williamson, Michael Gow, Kate Mulvany, Sue Smith, Andrew Bovell and Working Dog. Now he will bring his unique theatrical flair to the most successful and exciting Queensland story in years. Boy Swallows Universe will be the centrepiece of Sam Strong’s fourth and final season at Queensland Theatre. In his time as Artistic Director, Sam has transformed Queensland Theatre into the fastest growing theatre company in Australia, opened the new Bille Browne Theatre, directed multiple hit productions, and taken the company to all-time record audiences around Australia.

ABOUT THE PLAYWRIGHT/ADAPTOR
Tim McGarry trained at WAAPA and works as a writer, actor and director. Between 2005-2017 he was a Creative Director of Monkey Baa Theatre Company, one of Australia’s largest touring companies, where he co adapted nearly 20 new Australian works for the stage including the Helpmann award winning Jackie French’s Hitler’s Daughter, Sonya Hartnett’s Thursday’s Child and Li Cunxin’s The Peasant Prince – The True Story of Mao’s Last Dancer. He is passionate about interrogating and developing new work.