A MODERN WAY TO COOK BY ANNA JONES – BOOK REVIEW

A Modern Way To Cook Anna Jones cooking Kylie Thompson by Caroline Russo | on October 20, 2015 | 0 comments | in Book Reviews | Like it This is one of those ‘clearly not the target demographic’ type reviews that crop up from time to time, so take it with a grain of salt and you’ll no doubt find countless rave reviews elsewhere.

I love to cook. I may not be Masterchef material, but the kitchen certainly doesn’t leave me whimpering in terror down the line to Dominoes. Curling up and exploring new recipes is one of my favourite ways to relax of an evening. And with a tagline like ‘over 150 quick, smart and flavour-packed recipes for every day’, who am I to resist the lure of Anna Jones’s A Modern Way To Cook?

Jones’s ‘modern cooking’, in case you were wondering, is vegetarian fare with quite a few ingredients you’d have to specially source. This isn’t always the food that a quick trip to Coles will prepare you for. A Modern Way to Cook is a great book for vegans and vegetarians, and for those who love to wander the isles of boutique spaces searching out oddly named foodstuffs. If you really love your kale and quinoa, then you’re probably going to find some new ways to savour them here.

There are things that I really like about this book. Dividing the recipes into general timeframes rather than ingredients is a fantastic idea that would make it so much easier to find something quick and new to add to the weekly meal list. Each recipe also has its own prep time included, so you can pick the quickest if you need to. The recipes themselves are well-thought out and easy to follow along with, with enough white space to make sure you’re not accidentally skipping steps.

The food styling is beautifully done and keeps to the overarching theme of simplicity that Jones speaks about in her introduction. The meals look delicious.

I’m just not sure that ‘simple fare’ requires more than a trip to the local grocery store, nor a Google search to understand what’s going on.

This isn’t the cookbook for kitchen novices, unless you’re a fan of Google searches while you read. There’s an assumed knowledge at play here that will no doubt suit a lot of readers, but aggravate just as many. Though there are a few recipes in the collection that I’d try, for the most part, it’s just not the sort of book I’d refer back to regularly. As delicious as the recipes look, I don’t have time to track down specific ingredients in the name of a single recipe.

No doubt, as this style of cooking grows in popularity, it’ll be increasingly easy to source all of the ingredients in local stores, rather than having to seek them out elsewhere. But for now, it’s not quite the simple fare hoped for. But if you’re better able to source the ingredients, and enjoy adding vegetarian days to your week, then this is probably a good book to look into.

A Modern Way to Cook is published by Harper Collins, and is available on the big name e-book retailers, through the publisher’s website, or at leading bookstores nationwide. 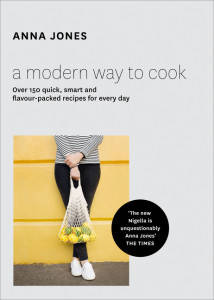