A Night at The Green Room

Green Room Matt Ward showcase songtress by Caroline Russo | on October 28, 2016 | 0 comments | in Entertainment | Like it 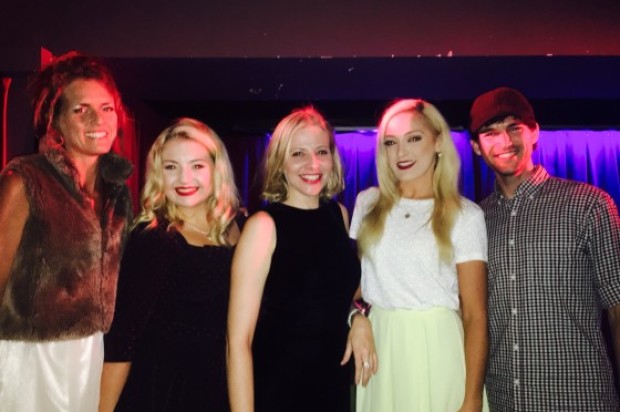 Monday night saw the highly anticipated return season of Matt Ward’s musical theatre cabaret talk show The Greenroom Project LIVE to The Basement of the Arts Centre Gold Coast. It was a big turnout for a BIG night! This is the 5th season of Matt Ward’s baby and he couldn’t have hosted better talent! The Basement was jam packed with an audience of likeminded theatre lovers, industry professionals, undiscovered artists and enthusiasts. With wine and nibbles in hand and networking opportunities in abundance, the incredible ambience of The Greenroom Project LIVE was clearly evident. This was going to be a memorable night. What a lineup! Special guest star Gretel Scarlett and featured artists Heidi Echelmaier, Emily Monsma, Jonathan Whitlow and Sarah Shah kept the audience mesmerized for just over 2 hours.

Scarlett, currently playing Kathy Selden in Singing In The Rain at QPAC blew the audience away with her performance of ‘I’m Still Hurting’ from The Last 5 Years. It was Scarlett’s second appearance at the project and she was clearly thrilled to return! This 2008 WAAPA graduate is best known for her breakthrough performance as Sandy in Grease opposite Rob Mills, and also starring in roles in productions of Wicked and Mama Mia! Trained in all facets of dance, Gretel spoke of the intensive preparation she underwent for her current role, stating an importance on maintaining stamina and core strength for live performances through keeping an active lifestyle and following a healthy diet. In 2014 Gretel released her debut solo album Hopelessly Devoted, and who knows, we may hear a future rendition of the Frozen anthem ‘Let It Go’ from her soon considering Elsa is one of her dream roles!

The featured artists all took to the stage like pros! Echelmaier’s charming disposition was contagious! Fresh from a standout performance as Elphaba in Ipswich Musical Theatre Company’s production of Wicked and also recently in Into The Woods and Next To Normal, Heidi was magic. Her unique rendition of ‘Stop’ by the Spice Girls was an excellent mix of talent and wit. ‘If I Didn’t Believe In You’ from The Last 5 Years was also sung with a natural elegance.

Whitlow shone through his clever version of a Scott Alan standout. Jonathan is well respected on the Coast for his recent portrayal of Peter Allen in the Boy From Oz for Spotlight Theatre Company. Singer/songwriter Sarah Shah enticed the audience with a haunting rendition of Randy Crawford’s ‘One Day I’ll Fly Away’. Shah’s singing was pure, sincere and soulful. As a true storyteller, her enchanting persona was expressed beautifully through her original song “Superstar”.

Conservatorium of Music graduate Monsma was effervescent! Emily is currently touring as Penny Pingleton in Harvest Rain’s Arena Spectacular production of Hairspray. The 21 year old’s energetic nature was perfectly portrayed in her cheeky version of the stand-alone piece “Musical Theatre Boys” by Chinco Paul. Emily is a true musical comedy star in the making.

Greenroom draw card and star of Jesus Christ Superstar Stevie Mac easily worked his magic with the audience. Unpredictably fabulous and super sexy, Mac flirted with his piano keys and delivered an hilarious anthology of musical theatre tunes in his own unique way, much to the delight of the audience!

Another highlight of the night was the very popular Open Mic segment, giving local artists the ability to shine in their own right! An obvious standout was the incredible talent of Matthew Semple. Matthew treated the audience to a snippet from his one-man cabaret show The Gospel According To Matthew, part of Phoenix Ensemble’s upcoming Spice Fire Cabaret Festival. Semple’s creation recently won Best Original Score and Best Director gongs at the 2016 Short and Sweet Festival. Semple is definitely a talent to watch. His satirical sermon on life, death and everything in between plays at the Beenleigh Pavilion Theatre November 11th and 12th. For tickets visit www.phoenixensemble.com.au

What an amazing night of entertainment The Greenroom Project LIVE was! It is a brilliant platform for showcasing amazing Queensland talent. Do yourself a favour and experience it! For more information on the November Greenroom Project LIVE and to purchase tickets head to www.thegreenroomproject.com.au or check out the Instagram or Facebook pages.

In 2017 Matt Ward Entertainment will be staging a special 20th Anniversary production of Rent, directed by Tim Hill in the Visy Theatre at the Brisbane Powerhouse from 1-4 February 2017 as part of the MELT Festival. Audition dates are Sunday 6th and Tuesday 8th November 2016. To register for an audition or to purchase tickets head to www.rentthemusical.com.au