A NOSTALGIC TRIP WITH THE BEATLES AT THE TWEED Bruce, who has an international reputation as a one-man Beatles tribute artist, will be the headline act at the Cooly Rocks On festival at the Tweed Head-Coolangatta border on Saturday.

The festival, which brings together 50s and 60s rock ‘n’ as well as cars from the era, is tipped to attract thousands of nostalgia fans this weekend.

Bruce, who counts John Lennon’s sister, Julia Baird, among his fans, is known for his ability to sound like Lennon, Paul McCartney or Ringo Starr.

He is also a favourite at Liverpool’s Cavern Club, which launched the Beatles and how stages a Fab Four festival each year.

The Fab Four was the moniker given the group, which also featured George Harrison, at the height of their fame in the decade known as the swinging sixties.

Bruce, who has appeared at all but one of the Cavern’s festivals during the past 20 years plays around the world. 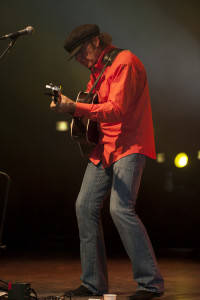 In 2004 he performed more than 200 Beatles songs back to back in Cleveland, Ohio, and has been inducted into halls of fame in Louisville, Kentucky, and, of course, Liverpool.

The singer-song writer has also recorded 14 albums, including four featuring his own songs, which charted in his native Canada.

At Cooly Rocked On shows he will play his own new songs alongside hits from the 60s and 70s, and ‘The Beatles by request’ medleys.

“I have been known to play every Beatles songs, back to back, but that’s not a gig, that’s a marathon,” says Bruce.

“The truth is it’s a lot more fun taking requests from the audience and mashing six and seven songs together right there in front of them.

“People ask for the hits, but there’s always someone who wants something they think I won’t know. I like the challenge”.

To book for Cooly Rocks On shows or catch the full program visit www.coolyrockson.com