A Thrilling Line up at The Star Sydney This June 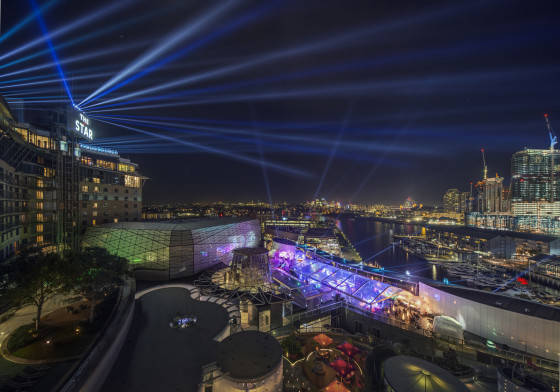 The Star Sydney will host a thrilling line-up of winter sport, entertainment and fine food across the precinct this June.

Take in all the action of this year’s footy season when NSW VB Blues take on the XXXX QLD Maroons for the 2016 Holden State of Origin Series Game I and Game II, screened live from the 24/7 Sports Bar.

In celebration of Vivid Sydney, the roof of The Star will be illuminated and will light the night sky from Friday, 27 May to Monday, 18 June. Music fans can dance under the stars in a silent disco at the Sky Terrace rooftop bar which will open from 5pm until late for four weekends of winter fun.
Foodies looking for an authentic farm-to-plate experience can indulge in exquisite Ralston Bros. Oysters at The Star’s signature Australian grill, BLACK by ezard for a special one-off Oyster Farm Dinner.

BLACK by ezard teams up with fifth generation oyster farmers, Ralston Bros. Oysters from the Clyde River at Batemans Bay, NSW for an exquisite Oyster Farm Dinner. Guests will enjoy a four-course degustation menu created by BLACK by ezard, executive chef, Dany Karam featuring caviar, fillet wagyu MBS5+ and a dessert of warm couverture ganache, banana sorbet, hazelnut mousse and cookie crumble. Throughout the evening, roving oyster shuckers will serve Ralston Bros’ signature fresh Waterfall and Heritage oysters that are known for their distinctive and pure flavour. The set menu is $185 per person, and $265 with matching champagne. For reservations phone 1800 700 700.

Sydney’s rooftop bar, Sky Terrace will open for four weekends of winter fun in celebration and support of Vivid Sydney. Sky Terrace will light up the night each Friday and Saturday from 6:00pm to 10:00pm with a silent disco under the glow of the illuminated rooftop with sets from some of the city’s best DJs, including DJ Sasha Moon, DJ Kitsch and DJ D-Flat to name a few. Cap off the experience with a range of cocktails and mocktails inspired by Vivid. Entry is free. Full DJ schedule available at star.com.au/skyterrace.

Catch the NSW Blues clash with the XXXX QLD Maroons in Game I and Game II of the 2016 Holden State of Origin series at the Home of the NSW VB Blues, The Star Sydney. Game I
kicks off on Wednesday, 1 June at 8:00pm live from ANZ Stadium. Take in every tackle on the impressive 34-square metre LED mega screen for optimum stadium atmosphere and top of the line audio. Fans can catch all the action at 24/7 Sports Bar on Wednesday, 22 June for the screening of Game II live from Suncorp Stadium.

One of Australia’s most-loved and successful music duos, Air Supply will return to Sydney for their 40th Anniversary Tour to perform soft rock hits such as ‘Lost in Love’, ‘Love and Other Bruises’ and ‘Now and Forever’ at The Star Event Centre on Sunday, 12 June. After meeting in 1975 as part of the Sydney production of Jesus Christ Superstar, Graham Russell and Russell Hitchcock have forged a long and successful musical career that continues to thrive.

Learn from the best and join leading real estate agent to the stars, Josh Altman on his first Australian tour at The Star Event Centre on Tuesday, 14 June. Stars of Bravo’s hit TV series, Million Dollar Listing: Los Angeles, Josh and his brother Matt Altman will reveal their trade secrets, offering real estate enthusiasts and aspiring entrepreneurs tips and insights to outsmart the competition and get ahead in the property market. With a live Q&A session, private dinner and meet and greet experience tickets available, don’t miss the chance to learn from the best. Tickets are priced from $49.96. Book now at star.com.au.

For the first time since participating in China’s popular reality TV show, I Am a Singer in 2015, Chinese folk singer, Li Jian, will bring his soothing melancholic sounds to Australian fans for one night only at The Star Event Centre on Friday, 24 June. Since launching his solo career, Li Jian has released eight albums and has received international acclaim for hit song, ‘Chuan Qi’ (The Legend). Don’t miss this inspiring performance, which will transport you to another era. Tickets are priced from $191.67. Book now at star.com.au.

For more information about what’s on at The Star in June, please visit www.star.com.au.