AACTA ANNOUNCES THE NOMINEES FOR THE 2022 BEST ASIAN FILM AWARD 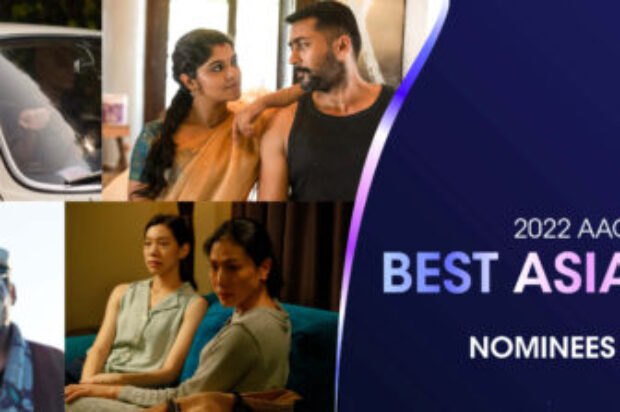 The Australian Academy of Cinema and Television Arts (AACTA) has today revealed the nine nominated productions in the running for the 2022 AACTA Award for Best Asian Film.

The Best Asian Film Award is the cornerstone of AACTA’s International Engagement Program, which celebrates the work and expertise of Australia’s closest northern Asian neighbours. Now in its 5th year the award acknowledges the increasing popularity, importance, and influence of Asian cinema in Australia and around the world.

In 2019, Korean film Parasite, dominated Screen awards internationally, and AACTA was the first international awards organisation to acknowledge it with the Best Asian Film Award that year, AACTA then followed this a few months later awarding it the AACTA international Award for Best film in the world. A few months after this the film famously became the first non-English film to win the Oscar for Best Picture.

More recently, the South Korean TV series, Squid Game captivated audiences around the globe becoming Netflix’s most watched series in 94 countries. The rising sophistication and popularity of Asian productions continues to amaze us all, and paves the way for the next generation of dynamic filmmakers to come from the region to share their unique perspectives with the world

This year’s nominees for Best Asian Film come from all parts of the region, including India, China, Thailand, Japan, and Hong Kong, and includes record-breaking box office hits, Sundance and Cannes Film Festival nominees and winners, Oscar favourites, and worldwide blockbusters that have captivated audiences worldwide.

The nine nominees for the AACTA Award for Best Asian Film are:

ABOUT THE NOMINEES
Representing just one of the many films helmed by women to dominate recent global cinema, BARBARIAN INVASION was written and directed by Tan Chui Mui, an indie filmmaker and pioneer of Malaysian New Wave Cinema. The genre-fluid film won the 2021 Shanghai International Film Festival.

Another notable nominee by a female director originates from China. HI, MOM is written and directed by Ling Jia, and has become the highest-grossing movie ever by a female director, even surpassing Patty Jenkins’s WONDER WOMAN (1984). HI, MOM was adapted from a popular TV sketch that comedian Jia herself performed in 2016.

The other two nominees from China are BALLOON and ONE SECOND. Shot largely around Qinghai Lake, Pema Tseden’s BALLOON is a Tibetan-language drama that blurs into the genre of magical realism. Taking out multiple wins in the Asian Awards circuit as receiving the Sfera 1932 Award at the Venice Film Festival, BALLOON is a social-political commentary that has been celebrated widely within the industry. ONE SECOND is directed by legendary Chinese filmmaker Zhang Yimou, and centres on a man who escapes from a farm-prison during the Cultural Revolution. The film has received over 20 international awards to date.

Chosen as Japan’s entry for Best International Feature at this year’s Oscars, DRIVE MY CAR has won over 50 international awards, including the Golden Globe for Best Foreign Language Film. Based on the short story by Haruki Murakami, DRIVE MY CAR is directed by Ryûsuke Hamaguchi.

Recent winner of the Indian Film Festival of Melbourne, SOORARAI POTTRU is a Tamil-language drama directed by Sudha Kongara and is based on the life of Captain GR Gopinath of Air Deccan from his book Simply Fly.

Other Indian nominees include THE DISCIPLE and SARDAR UDHAM. THE DISCIPLE is a Marathi-language drama written & directed by Chaitanya Tamhane which won two awards at the Venice Film Festival last year, including Best Screenplay. SARDAR UDHAM is directed by Shoojit Sircar and distributed by Amazon in India where it was viewed by a staggering 35m people in its first weeks of release. The film documents the life of the Indian revolutionary who assassinated the former Punjab Governor Michael O’Dwyer, the man responsible for the Jallianwala Bagh massacre.

Thailand’s nominee is the 2021 Sundance Film Festival Award winner ONE FOR THE ROAD. Directed by Baz Poonpiriya, the film was produced by renowned auteur Wong Kar Wai, who’s stylistic attributes can be found throughout the film.

“The calibre of the Best Asian Film nominees this year show why they are growing in popularity across the globe,” said AFI | AACTA CEO Damian Trewhella. “These films have made such a huge impact upon the Awards season so far, and AACTA are proud to be able to honour them in this way – we also look forward to continuing to honour and celebrate the great work from our northern Asian neighbours, which so greatly influences our own.”

The winners will be announced on Thursday March 3, 2022.