AACTA Awards Awards in film Cinema and TV Jackie Weaver by Caroline Russo | on January 27, 2014 | 0 comments | in Whats the Buzz | Like it 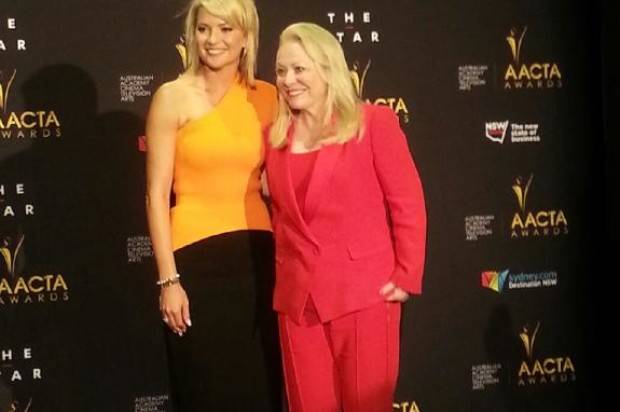 Today the Australian Academy of Cinema and Television Arts (AACTA) announced one of Australia’s most loved and respected actors Jacki Weaver will be the next recipient of the AACTA Raymond Longford Award.
First presented in 1968 and named in honour of the great Australian film pioneer Raymond Longford, the AACTA Raymond Longford Award is the highest recognition the Australian Academy can bestow on an individual who has made a truly outstanding contribution to the enrichment of Australia’s screen environment and culture.
Jacki will be presented the AACTA Raymond Longford Award in tribute to her extraordinary career at the 3rd AACTA Awards Ceremony on Thursday 30th January in Sydney. Presented by a raft of screen professionals living and working in Australian and abroad, the tribute will showcase great moments of time across her 50 year career; including 60s bandstand footage, her iconic and classic 70s cinema roles and her recent power- packed performances that have got the whole world watching. The tribute will be broadcast that evening on Network TEN.
Alan Finney, AFI |AACTA Chair said of the news, “I have had the pleasure of knowing Jacki for many years and consider her both a peer and a friend. Over the decades we have seen the Australian film and television industry develop and connect to a global industry and like many I am full of admiration for Jacki’s commitment to her craft, her ability and her continued success both here and now abroad.
“She has been a mentor to so many young performers and those involved in the challenging world of theatre and film and I am delighted that she is has been chosen as an AACTA Raymond Longford Award recipient. I sincerely believe she is a most appropriate recipient.”
With an entertainment career that spans five decades it has been said by those that knew Jacki as a child that “she was born to act”. An AACTA International Award winner, a multi AFI Award winner and two time Oscar nominee, Jacki is known for her diminutive height, her towering presence, her quick wit and a damned infectious grin.
After winning her first talent contest at the age of four, Jacki secured her first major acting role at the age of fifteen when she starred in a stage production of Cinderella in 1964. Soon after she landed her first screen role in the 1966 Australian children’s television science fantasy series Wandjina! (ABC TV).
Another major career breakthrough came in 1971 when she won her first Australian Film Institute Award for her work in the comedy feature film Stork. Her award winning performance proved to be a huge hit with both Australian audiences and film critics.
During the next decade Jacki became an icon of the Australian Film Renaissance and gained a sex-symbol reputation due to her performances in films such as Alvin Purple (1973).
Other notable work at this time included a small role in Peter Weir’s critically acclaimed film Picnic at Hanging Rock (1975), and a part in Caddie (1976) for which Jacki won her second AFI Award.
 Caddie co-star Jack Thompson said “My first lead was in the 1974 David Williamson screenplay ‘Petersen’. Jacki Weaver played my wife, Susie. She was more established than me as an actor back then.
“Personally, I can’t think of anyone more deserving than Jacki to get this prestigious award. She’s given so much to the industry. She is a very dear friend, a fabulous actress and a delight to work with.”
In the following decades Jacki continued to work across film and television as well as in theatre, cementing her status as an Australian household name.
In 2010 she was brilliantly cast against type and delivered a chilling and controlled performance as crime matriarch ‘Smurf’ Cody in David Michôd’s thriller Animal Kingdom.
Her stunning performance amazed and thrilled the Australian industry, and the global industry took notice – she received her first Oscar nomination as well as winning an AFI Award, National Board of Review Award, Los Angeles Film Critics Association Award and Satellite Award.
Animal Kingdom Director David Michôd said “In the years since Animal Kingdom was released Jacki’s career has entered an extraordinary and richly deserved new chapter. In addition to her professional achievements Jacki is a delightful person and a wonderful ambassador for Australian screen culture.”
In 2011 Jacki made her Hollywood film debut in the comedy The Five-Year Engagement, alongside Emily Blunt and Jason Segel. Since then she has starred in Stoker, with fellow Australian actors Nicole Kidman and Mia Wasikowska and in David O. Russell’s Silver Linings Playbook alongside Robert Di Nero, Jennifer Lawrence and Bradley Cooper in which she delivered yet another acclaimed performance, won an AACTA International Award and was nominated once again for an Academy Award.
Minister for Tourism, Major Events and the Arts, George Souris, congratulated Jacki Weaver on winning the Raymond Longford Award, saying it was wonderful to see the NSW-born actress recognised through this prestigious Australian award.
“NSW is a powerhouse of screen talent, with our State home to some of the biggest names in film today. Jacki is among our finest actors, whose outstanding creative talent has continued to shine for 50 years, both here in Australia and overseas,” Mr Souris said.
“I am delighted Jacki will be acknowledged for her remarkable screen career at Sydney’s 3rd AACTA Awards, a key creative industries event on the Sydney and NSW Events Calendar that is supported by the NSW Government, through our tourism and major events agency Destination NSW.”
Damian Trewhella, AFI | AACTA CEO said “Jacki Weaver barely needs introduction she is so well known, respected and admired in this country. She has proven her worth to the Australian entertainment industry a hundred times over and is a marvellous ambassador for all Australians and our industry.”
“On behalf of the AFI | AACTA Board, executive and members I extend our warmest congratulations to Jacki, and like her many Australian fans, we look forward to seeing her honored at the 3rd AACTA Awards Ceremony this coming Thursday.”