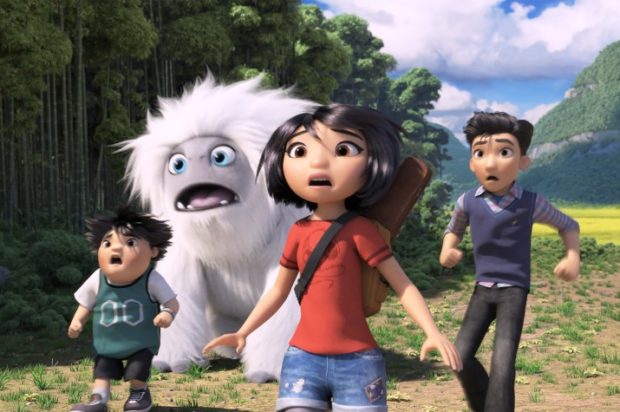 The reports are in for Box office weekend leading is the film ‘Abominable’ is the biggest opening of the year for original animation.

Universal’s “Abominable” opens with $20.8 million, making it the best opening for an original animated film this year and only the third original film to open atop the box office.

To report in second place, Focus Features’ “Downton Abbey,” now in its second weekend, added $14.5 million (a 53% drop) for a cumulative $58.5 million. Internationally, it earned $10 million for a global cumulative of $107.1 million.

In fourth place, Warner Bros.’ “It Chapter Two” added $10.4 million in its fourth weekend for a cumulative $194 million. It now stands at $417.4 million in global receipts.

In seventh place, Roadside Attractions’ “Judy” the bio pic of Judy Garland opened with $3.1 million across 461 locations, a per-screen average of $6,705.

The film will be one to watch during awards season with early Oscar buzz surrounding Renée Zellweger’s performance as Judy Garland near the end of her life. It earned an 83% “fresh” rating on Rotten Tomatoes.

At No. 8, Universal’s “Good Boys” added $2 million in its seventh weekend for a cumulative $80.4 million.

In ninth place, Disney’s “The Lion King” added $1.6 million in its 11th weekend for a cumulative $540 million.

Rounding out the top 10, Lionsgate’s “Angel Has Fallen” added $1.5 million in its sixth weekend for a cumulative $67.2 million.

In limited release, Roadside Attractions’ “The Peanut Butter Falcon” added $908,270 across 935 locations in its eighth weekend, bringing the film to a cumulative $18.1 million and making it the No. 1 indie platform release of 2019.

The animated film “Promare,” in its second weekend from GKids, added $113,455 in 31 locations to total $1.1 million domestically, including $775,000 from Fathom Events screenings.

RIDE LIKE A GIRL IS FIRST PAST THE POST AT THE WEEKEND BOX OFFICE
Rachel Griffith’s directorial debut RIDE LIKE A GIRL has topped the Box Office on its opening weekend in Australian cinemas.

After opening at number 1 on Thursday, the film is continuing its race towards the record books and it is on track to become the highest grossing Australian film of the year. The weekend takings were $1,684,858 with a cumulative total of $2,377,731 (with some screens still to report.)

RIDE LIKE A GIRL is a Transmission Films release and is screening at 269 cinemas around the country. It is the feature directorial debut of Rachel Griffiths and it stars Teresa Palmer as Michelle Payne and Sam Neill as her father Paddy Payne. Stevie Payne has been receiving critical acclaim for playing himself in the film.

Richard Payten and Andrew Mackie from Transmission Films said: “She’s first again! This opening weekend result puts RIDE LIKE A GIRL in a class with many of the biggest Australian films. That audiences have embraced RIDE LIKE A GIRL during a competitive school holiday period, against major studio releases, is a testament to Michelle Payne’s inspiring story and the wonderful storytelling by the makers of this crowd-pleasing hit. We’re hearing feedback from cinemas of standing ovations and grown men crying. Tissue makers can expect stock to fly off the shelves over the coming weeks.”