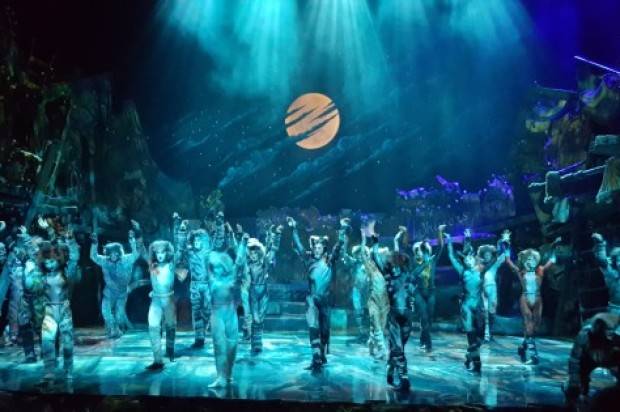 After having such success at the London Palladium last Christmas, Andrew Lloyd Webber’s iconic West End musical Cats has returned to Brisbane for another strictly limited season at QPAC from 29 January to 14 February.

The grand set design for this production is surprisingly able to be transported from city to city in just nine crate boxes. The set arrived on Thursday and was all in place in the theatre for the dress rehearsal on Friday.

Based on T. S. Eliot’s Old Possum’s Book of Practical Cats, the show is set amongst a larger-than-life junkyard playground and is alive with our favourite feline characters including Rum Tum Tugger, Mr. Mistoffelees, Macavity, Jennyanydots, Old Deuteronomy, Grizabella and Skimbleshanks.

Australia’s own Delta Goodrem stars as Grizabella who features in the song ‘Memory’. Fellow cast members say that she is a pleasure to work with.

The resident director, Steven Morgante, says that this production of Cats features an updated song and dance routine for the tap number and a new rendition of a song in the style of rap. Furthermore, the Brisbane season has been so well ticketed that they had to accommodate for the demand of audiences and add more performance nights. He went on to say that the show has a great cast, including numerous performers from Queensland, whom have all learnt to do their own incredible makeup.