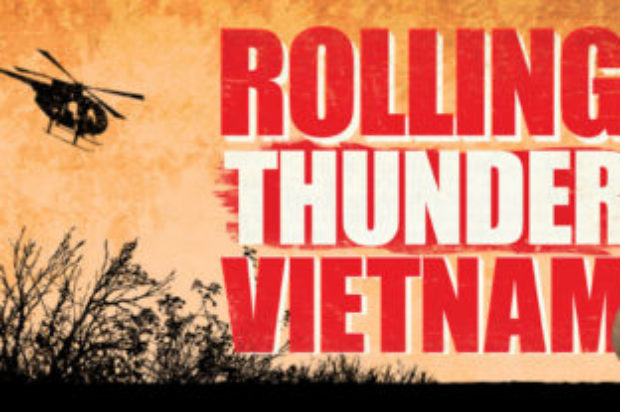 One of the rising stars of the Australian stage, Annie Aitken, has been announced to play the female lead of the country girl/anti-war protestor Sarah in the acclaimed rock music drama Rolling Thunder Vietnam – Songs That Defined A Generation, coming to QPAC Concert Hall and The Star Gold Coast this March.

Aitken joins a stellar cast, including Toby Francis (Once, Kinky Boots) as the conscripted soldier Andy, Matthew Pearce (Calamity Jane, Rent) as the American marine Thomas and Brisbane’s own Tom Oliver (Velvet, Marcia Hines Band), reprising the pivotal role of the good-hearted larrikin soldier Johnny. They are joined by supporting artists Imogen Moore and Will Ewing.

Aitken, who recently played the title role in Thoroughly Modern Millie for The Production Company in Melbourne, is quickly making a name for herself as a versatile and accomplished singer, actor and dancer. Originally from Perth, the performer came to notice at Hayes Theatre Co in 2017 when she played the young Dame Nellie Melba in the new Australian musical Melba, starring the award-winning soprano Emma Matthews as the legendary opera singer.

A graduate of the Victorian College of the Arts, Aitken appeared in the star-studded cast of Jekyll & Hyde, alongside Anthony Warlow and Jemma Rix, and this month features in the Australian comedy DreamSong in Melbourne.

Rolling Thunder Vietnam, written by Bryce Hallett and directed by David Berthold, is a unique and powerful production comprising vastly experienced musicians led by the esteemed musical director Chong Lim. It combines potent and poetic songs of the ‘60s and ‘70s, stunning video footage across four screens and truthful storytelling inspired by interviews with Vietnam War veterans and actual letters.

In an era of uncertainty and terrorism, the show about the disruption of war, civil unrest, protest and love, remains resonant and timely. Upon being conscripted, the inquisitive and caring Andy says, “My name had been drawn in the ballot for national service. It was called ‘the lottery of death’. I felt sick in the stomach. I don’t hate anybody. What has any of this got to do with me?”

Since the world premiere of Rolling Thunder Vietnam in Brisbane in 2014, it has become one of the most talked about musical and theatrical events to be created and mounted in Australia.

Producer Rebecca Blake said, “The show has earned rave reviews as an electrifying tour de force; a vibrant and emotionally-stirring production with humanity and heart. The Vietnam Vets have warmly embraced the show and that means a lot to our wider audiences…We are thrilled to have such an outstanding cast and the best musicians you could hope to find anywhere in the world.”

Dr Brendan Nelson, the outgoing Director of the Australian War Memorial, is Patron of the 2020 tour. The limited season includes performances in Geelong, Brisbane, Gold Coast, Melbourne, Canberra and Sydney.

The exhilarating production features many of the greatest rock songs ever written and produced, including classics by Steppenwolf, Joe Cocker, Rolling Stones, Creedence Clearwater Revival, Gladys Knight, Billy Thorpe and Paul Simon. The era of the Vietnam War – the world’s first televised war – spawned some of the most strident and lyrical songs of the 20th century: Fortunate Son, All Along The Watchtower, The Letter, Magic Carpet Ride, Help Me Make it Through the Night, Born to Be Wild, War, Paint it Black, Killing Me Softly With His Song and Bridge Over Troubled Water.

Encompassing conscription, combat, love letters, protest and homecoming, Rolling Thunder Vietnam is both epic and intimate, and largely illuminates the unpopular war from an Australian perspective. The narrative, set in the traumatic and fast-changing late ‘60s, draws audiences inside the lives of young men on the battlefront and their families and loved ones at home.