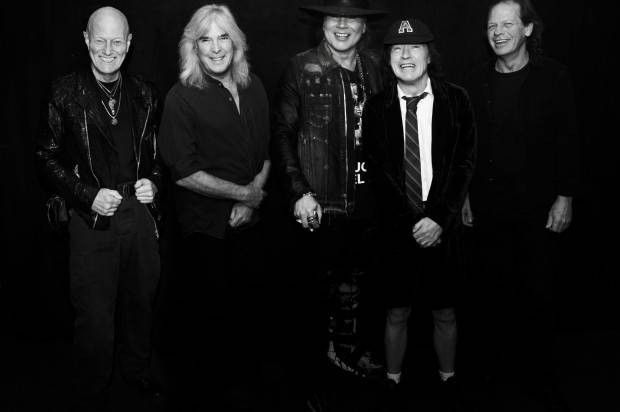 NEW LINE UP TAKES EUROPE BY STORM TO CRITICS ACCLAIM

While packing out stadiums across Europe to rave reviews from critics and fans alike this summer, AC/DC have today announced full details of their re-scheduled USA tour dates. The AC/DC ‘Rock or Bust World Tour’ returns to America for ten final shows in August and September 2016. They are in Greensboro, Fort Lauderdale, Atlanta, Columbus, Cleveland. Detroit, Buffalo, New York, Washington & Philadelphia. Original tickets will be honoured for all rescheduled dates, refunds are available at point of purchase.

AC/DC have played to over 4 million fans on the ‘Rock or Bust World Tour’ and the current line-up of Angus Young, Cliff Williams, Stevie Young, Chris Slade and Axl Rose are set to continue their global trek with a return, for the final leg, to the USA.

The rescheduled AC/DC ‘Rock or Bust’ U.S. dates are:

The second leg of AC/DC’s European tour which kicked off in Lisbon on May 7 has been greeted with acclaim from all quarters. Rolling Stone headlined with ‘’AC/DC is a triumph – this new union is one of the touring hits of the summer’’ while the Guardian in London called the gig – “triumphant…a rock n roll victory on wheels…” The Telegraph critic added: “Angus Young is a consummate showman rocks the duck walk… Axl hit every note and sent it to the heavens… simply great.”

Not for the first time last year, AC/DC were hailed as the biggest selling live act in the world when, sadly, vocalist Brian Johnson was forced to step down midway through the U.S. tour after being advised by doctors that he risked total hearing loss if he continued to perform live. For the shows in Europe with Axl Rose on vocals, AC/DC have been surprising fans by including rarely played tunes from their formidable archive such as ‘Rock ‘n’ Roll Damnation’, ‘Riff Raff’, ‘Touch Too Much’ and ‘If You Want Blood (You’ve Got It)’.

Angus Young commented: “This band has got a ton of energy and you’re going to see a fusion of all that terrific chemistry that we have felt ever since rehearsals in Lisbon. I want to get back out there onstage in the US with these guys so our audience can see and feel it too.”

AC/DC released their highly acclaimed studio album, ROCK OR BUST, in December 2014 and it peaked at #1 in twelve countries and #3 in the U.S. Billboard charts. In a career that spans over four decades, AC/DC have sold an incredible 200 million albums worldwide, over 70 million in the US alone, producing landmark albums such as HIGHWAY TO HELL and the seminal BACK IN BLACK which is the biggest selling hard rock album ever, helping to make AC/DC one of the top five selling bands in American music history. Their distinctive brand of high voltage rock ‘n’ roll, awesome stadium rock shows and everlasting anthems continues to energise fans globally from Adelaide to Atlanta, from Prague to Philadelphia and all points between.