australian indie films cinemas love is in the air LOVE YOU LIKE THAT by Caroline Russo | on October 13, 2021 | 0 comments | in Interviews | Like it 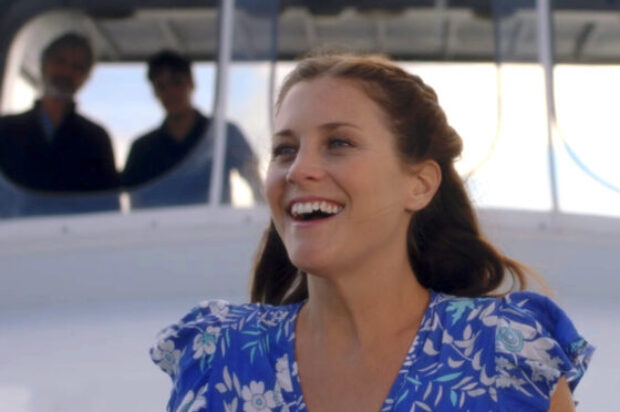 ONE TO ONE WITH ALLIRA JAQUES

Australian Actress Allira Jaques stars in “Love You Like That” a charming heart-warming, nostalgic movie that is to hit the cinemas this month in October.

Allira had just returned from LA to Australia just as the pandemic began when the producer of the film got in touch Sean Gannon, to discuss the film. I was delighted to talk to Allira who tells us a bit more about the film without any spoilers on my Utube channel.

The film also stars Mitchell Hope, from the Disney film series Descendants and comedian Steph Tisdell in her first feature performance. One to watch out for who is a cracker on the screen.

Love is in the air in the coastal town of Seafront Sands. The mysterious appearance of a young woman washed up ‘starkers’ on Mim Beach turns the sleepy town into a tailspin. Is she a mermaid, why does she have amnesia, what is going on with her craving for coffee? The young woman has a profound effect on everyone she comes into contact with: a hard as nails local councilwoman, her retired Naval Captain brother, a grieving widow running the local cafe, a sensitive policeman afraid to pop the question; and Harrison, a handsome young man who runs a dating agency with Emily, his sassy assistant. During the course of one eventful day, big secrets are revealed that will make this a mythical event that will change everyone’s life forever.

LOVE YOU LIKE THAT will be the first new Australian feature film to be released in Sydney cinemas after restriction ease. The film producers comment;
“The world is coming out of a pandemic, and they are looking for hope, courage and love. Love you Like That will have the audience crying with joy and laughing with excitement”.

The film also stars John Harding (The Crossing), John Jarratt (Wolf Creek), Allira Jaques (Daddy’s Little Girl) and is complete with a special tribute performance by John Paul Young singing “Love is in the Air”. LOVE YOU LIKE THAT is the perfect film to bring people back into the cinemas.

LOVE YOU LIKE THAT is written, directed and produced by Eric C.Nash, Cinematographer and Co-Director Robert Draper, Produced by Sean Gannon, Executive Produced by Patrick Kriz and Music Composed by Mark Smythe.

Pivot Pictures will release the Australian romantic comedy LOVE YOU LIKE THAT, into cinemas from 21 October (Melbourne will release once cinemas open).