#GoggleboxAU ten network TV SHOWS by Caroline Russo | on August 18, 2021 | 0 comments | in Entertainment | Like it 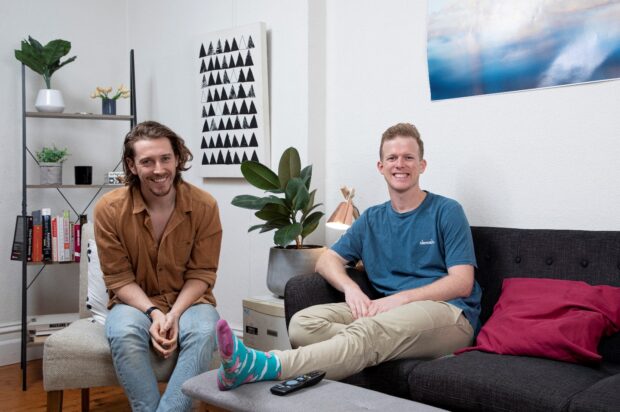 As ‘originals’ who appeared for the first ten seasons over five years, the duo return to the four-time TV WEEK Logie and AACTA award winning show, when it premieres Thursday, 9 September at 8.30pm on 10 and 10 Play On Demand.

Best mates and larrikins, Adam and Symon met on a university pub crawl as students. All these years later, they still share similar interests, with careers as physiotherapists who are die-hard AFL armchair fans with a vast collection of colourful socks. Adam who recently got married and mate Symon are ready once again to get acquainted with the latest and greatest our television screens have to offer.

“We’ve spent so much time on the couch in the last year, we thought it was only natural to come back to Gogglebox!” said Adam and Symon unanimously.

The 14th season sees most of Australia’s favourite households back on the couch ready to share their thoughts, feelings and often hilarious opinions and reactions of what’s on our television screens.

Reflecting the sign of the times and the immediacy of Gogglebox, two of the Gogglebox families residing in Sydney’s hotspots, the Delpechitra and the Elias families, will sadly sit out this season, the first time for the Delpechitra family as one of the original Gogglebox households.

The Silbery family – mother and daughter, Emmie and Kerry will sit on their own couch in their own home for the first time, joined by third generation Isabelle zooming in from their usual couch, for the safety of Gogglebox’s beloved 93-year-old Emmie.

Sarah Marie, Matty and their almost two-year-old son Malik, will zoom in with best mate and ‘uncle’ Jad, and frontline worker/nurse Kaday will settle on her couch with best friend Chantel zooming in.

Ready to return to their lounges once again are five of the six original households, including dealers of indigenous art Mick and Di who just celebrated their 54th wedding anniversary, happily married couple and grandparents Lee and Keith, Greek best friends Anastasia and Faye and tight knit family of four The Daltons.

Gogglebox Australia.
Premieres Thursday, 9 September At 8.30pm.
On 10 And 10 Play On Demand.