AI TECHNOLOGY USED IN SEEING WHO COULD BE NEXT JAMES BOND

Film and technology industry professionals took to the virtual stage at the American Film Market this week for a live and interactive webinar exploring ‘How to Cast the Right Actors for Your Film by Using AI’ revealing insights into Hollywood’s most hotly debated topics, from ethnic and gender diversity – to the most fiercely speculated question; who will be the next 007?

Hosted at the American Film Market by CNN Anchor, Ana Maria Montero, alongside panelists; Producer and Talent Manager, Daryn Simons from Cohesive Entertainment Group, multi-award-winning Canadian film Director, Sean Cisterna, together with Largo.ai CEO, Sami Arpa, the interactive session demonstrated how AI can yield success in casting and ultimately Box Office revenue. The session was attended by film makers who were polled on some of the industry’s most contentious issues.

AI provides the entertainment industry with a useful tool to challenge diversity problems and reduce gender and ethnicity bias. Overall, the data shows progress in both gender and ethnic diversity in movies over the past two decades.
Largo.ai aggregated the data from 22,000 movies over the last 20 years revealing that whilst there has been an improvement in diversity for gender within lead role representation – there is still a way to go. The data reveals that women being cast in lead roles has increased from an average of 32% in the last 20 years to 38% in the last three years. However, when considering second and third supporting roles, there is no change – revealing that the dominance of male casting still prevails. Digging deeper into genre specific insights, Action movies demonstrate the most significant progress within the last two decades, with lead roles given to women rising from 16% to 25%. However, 25% still represents poor gender diversity overall and that much work is yet to be done.

Man Vs The Machine: Should AI be ethnicity blind?

A game-changing factor in the battle to reduce society’s unconscious ethnicity bias in casting is that Largo AI’s software has been developed without providing the ethnicity of actors, making it blind to ethnicity. This enables casting directors to make informed decisions based on the best suitability and match for the role, regardless of ethnicity.

Because there is, arguably, an ongoing need to cast characters from a specific ethnicity in line with the story, Largo posed this question to its interactive audience and asked: Should AI be ethnicity blind? The results show an almost equal divide in opinion with a 53% majority vote in favor of omitting ethnicity as a consideration. This show that at this moment in time, there is no clear answer and the debate continues.

Taking film and literature’s most ubiquitous and iconic role of all time, Largo.ai then looked at the most hotly speculated question – who should step into Daniel Craig’s shoes as the next Bond? As an AI assisted casting process, the data reveals which actors are predicted to generate the highest grossing Box Office revenue.

Largo’s AI scoring system works by creating a DNA footprint of each actor which comprises over 1000 on-screen character attributes, such as character typology, story elements, and cinematographic tones. The system then analyses each of these attributes – weighing up audience reaction by cross-comparing the data against historic films. The systems also looks at the actual film character (James Bond rather than Sean Connery, the actor) and creates another DNA footprint for the character. It then cross compares the actor’s DNA footprint against the characters’. In this instance, the software looks for correlation between the two. This is crucial given research and previous projects have found a very high correlation between the success of a movie and the actor/character match rate – such correlation is more important than the popularity of the actor.

Taking a look back retrospectively at the debate getting most people’s tuxedos in a twist, Largo.ai also ran a search to create a definitive ranking of the best ever James Bond actors to date. Largo.ai’s deep dive showed Roger Moore taking the definitive 007 crown with 91.8%, followed by Pierce Brosnan with 90.8%, Sean Connery with 90.3% and Timothy Dalton trailing behind with 88.5%. 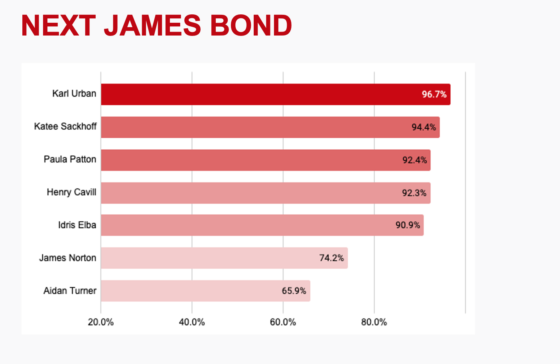 In contrast, the audience voted Idris Elba as the favourite casting choice for Bond, championing ethnic diversity. This was followed closely by Henry Cavill and Paula Patton who matches AI’s ranking within third place. 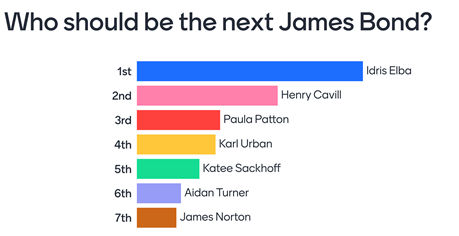 Largo.ai then ran autobiographical film, Corsair, under the AI microscope to cross-compare casting considerations such as popularity, face similarity and AI Box Office predictions. Currently in pre-production, Corsair, is written and produced by Radik Kudoyarov and based on unknown facts of the life of Rudolf Nureyev – the legendary ballet dancer defected from the Soviet Union to the West in 1961, died at age 55 from AIDS. He went on to dance with The Royal Ballet in London and served as director of the Paris Opera Ballet.

Currently the most hotly contested actors in line for the lead role include Douglas Booth, Sam Heughan, Rupert Friend, Bill Skarsgard, and August Wittgenstein. Largo presented its AFM audience with best AI matches (best matched and highest grossing Box Office prediction) as well as popularity or ‘STARmetre’ according to IMDB.

According to Largo AI, the best financial yields were revealed as Rupert Friend with a 93% AI match, $152M Box Office prediction and STARmetre score of 1,627. August Wittgenstein is also a 93% AI match with $150M predicted Box Office revenue and a STARmeter score of 14,214. In this case, AI would suggest casting August Wittgenstein who has an equal AI match, similar Box Office yield but – crucially – his STARmetre IMDB rating (14,214) indicates he would be more affordable, commanding less of a fee, thereby maximising budget for this movie.

When the audience was asked (prior to AI data being revealed) they considered Rupert Friend as best matched for the role narrowly above August Wittgenstein – showing human instinct is very clearly aligned. Yet AI helped to distinguish how casting August Wittgenstein would ensure the same return but for less investment. 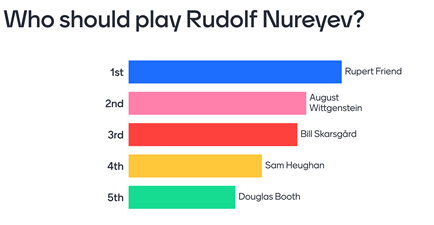 Given this is a biopic, a crucial factor to consider is how important facial similarity is when casting. According to Largo AI, Cillian Murphy, Tom Weilling, Harry Connick and Julian Sands are the most similar matches, representing the different ages within Rudolf’s lifetime.