Running over three glorious days at Palace Barracks from this Friday, the 2016 Alliance Française Classic Film Festival is delighted to present 5 timeless French movies starring some of the most iconic actresses to grace French cinema, from Brigitte Bardot, Catherine Deneuve and Jean Seberg to Romy Schneider, Simone Signoret and Jeanne Moreau

The Festival will feature renowned titles from STUDIOCANAL’s archive vault in Paris allowing audiences the rare opportunity to savour these films on the big screen.

The seductive, romantic comedy-adventure, Lovers Like Us, starring Catherine Deneuve and Yves Montand, will launch the Festival at Palace Barracks this Friday at 7.00pm, preceded by a Cheese & Wine Tasting at 6.15pm. Tickets can be purchased from: http://www.palacecinemas.com.au

Shot in 1975 and directed by Jean-Paul Rappeneau, Lovers Like Us stars the enigmatic Montand as Martin, a perfume creator, who has left the stress of Parisian life to live out his days on an island paradise. Passing through Caracas, he meets the dazzling Nelly (Deneuve). This volcanic woman has just broken off her engagement to a rich Italian, and in search of her freedom, comes across Martin. Chaotic comedy ensues, and the two find themselves moving from antagonism to fondness, as Martin’s dream for the solitary island life drifts further and further from reality.

Other films to screen at the Festival include:

Marie (Signoret) is nicknamed Casque d’Or (Helmet of Gold) by her gangster lover Roland thanks to her distinctive head of blonde hair. The story unfolds in a dancehall on the banks of the Marne, where she is introduced to the handsome stranger George (Reggiani), much to Roland’s chagrin. They fall instantly in love, and their passion triggers an underworld rivalry that rapidly descends into conflict, treachery and murder.

In Marseille, Michel (Belmondo) takes what he wants when he wants it – modelling himself on the film persona of Humphrey Bogart. Whilst stealing a car, he impulsively shoots and kills a policeman. Young, self-centred and on the run, he flees to Paris and reunites with the young American Patricia (Seberg) he met weeks earlier, and tries to convince her to join him as he flees. Pregnant and impressionable, she struggles between her dream of becoming a journalist in Paris, and her bourgeoning affection for this fearless young man.

Maria I (Bardot) is the daughter of a life-long anarchist who has spent her life blowing up bridges and police stations. She is taken on as the protégé of Maria II (Moreau), a dancer in a travelling vaudeville show. Drama ensues when the Marias meet Florès (Hamilton), a socialist revolutionary, and the two women become moved by the plight of the peasants. Jumping on the revolutionary bandwagon, Maria and Maria use their intelligence, courage and sensual charm for justice. 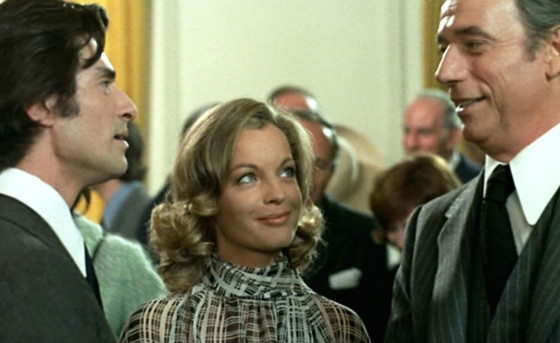 Rosalie (Schneider) lives in the beautiful Normandy, with her child from her former husband. She divides her time between Cesar’s and her mother’s homes. Everybody likes Rosalie; she is beautiful, multilingual and free spirited, and Rosalie is in love with Cesar. Rosalie’s world is turned upside down when her old flame David mysteriously reappears, and seeks to reclaim her. And so begins a struggle between the two men for her affection. Cesar and David are opposing forces – The first is a self-made scrap metal magnate, and the second is an artist. The two men focus their affections on the beautiful Rosalie, with unforeseen results.