In keeping with its reputation for showcasing the very best of French cinema, the 2015 Alliance Française French Film Festival is set to captivate Australian audiences with arguably the most intoxicating selection of films in its proud, 26-year history. On offer will be 49 fantastic features, most of which will be screening for the first time in this territory.

Presented by the Alliance Française in association with the Embassy of France in Australia and the deeply valued support of Presenting Sponsor Peugeot, the Festival’s 26thth season will take place across 8 cities at a host of wonderfully appointed Palace Cinema venues from early March until mid-April. In Brisbane, the Festival will screen at Palace Centro and Palace Barracks from 13 March until 1 April.

Launching the Festival at spectacular Gala Opening Nights around the country will be Gemma Bovery, a beguiling romantic comedy-drama from renowned director Anne Fontaine (Coco Before Chanel), which had its world premiere at the 2014 Toronto International Film Festival. 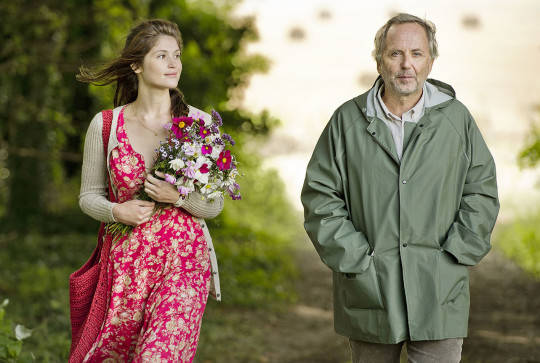 Starring the incomparable Fabrice Luchini alongside the delectable Gemma Arterton, Gemma Bovery, tells the story of an English couple named Gemma & Charles Bovery (Arterton and Jason Flemyng) who move to a small, picturesque Normandy town. Local baker and resident Gustave Flaubert fan, Martin Joubert (Luchini) can’t believe that here are two real-life figures who seem to be replicating the behavior of his favourite fictional characters, right before his eyes…and becomes a man obsessed. Based on the popular graphic novel by Posy Simmonds, Gemma Bovery is an endearing film about the dangers of stirring passions that will screen courtesy of Regency Media.

And for the Festival’s Closing Night celebrations, we are delighted to revisit a modern French classic, Paris, Je T’aime that will take audiences through the arrondissements of Paris, with 20 superb short films inspired by the subject of love, from acclaimed directors such as Olivier Assayas, Bruno Podalydès, Gus Van Sant and Ethan and Joel Cohen.

Each film in this year’s line-up is a highlight and here is but a small taste of what lies ahead:

3 HEARTS (3 Coeurs)
DIrector: Benoît Jacquot
Cast: Catherine Deneuve, Charlotte Gainsbourg, Chiara Mastroianni & Benoît Poelvoorde
Stranded in a provincial French city one evening after missing his return train to Paris, Marc meets Sylvie. Together, they wander the streets until morning, talking happily, falling in love and making a date to meet again. When circumstances prevent this reunion, Marc searches for Sylvie but ends by finding someone else: Sophie. What Marc doesn’t realise is that Sophie is Sylvie’s sister. A sublime, if painful, romance about love and the capricious nature of fate.

ALMOST FRIENDS (On a Failli être Amies)
Director: Anne Le Ny
Cast: Karin Viard, Emmanuelle Devos, Roschdy Zem, Philippe Rebbot, & Anne Le Ny
Karin Viard and Emmanuelle Devos, star together for the first time as two women who want more out of life – both at work and in the bedroom. Devos plays Carole, who feels overshadowed by her husband, Sam, a Michelin-starred chef. Whilst taking a course at an adult training centre, she meets Marithé (Viard) who wants to help Carole create a new, fulfilling life. They become close friends, however complications ensue when Marithé encounters Carole’s charming husband.

THE BÉLIER FAMILY (La Famille Bélier)
Director: Eric Lartigau
Cast: Karin Viard, François Damiens, Louane Emera, Eric Elmosnino, & Roxane Duran
An uproarious box office smash-hit about family ties, the joy of music and breaking free. In the Beliér family, everyone is deaf, except dutiful sixteen-year-old Paula, who acts as an indispensible interpreter for her parents and younger brother, especially in the running of the family dairy farm. Though her salt-of-the-earth father has decided to run for mayor, Paula’s attentions are very much elsewhere. She’s witnessed the handsome new boy at school enroll in the choir, and impulsively joins too. It’s not long before her music teacher discovers her considerable talent, however his encouragement only exacerbates the matter of Paula’s independence…

THE BLUE ROOM (La Chambre Bleue)
Director: Mathieu Amalric
Cast: Mathieu Amalric, Léa Drucker, Stéphanie Cléau, Laurent Poitrenaux & Serge Bozon
For his second directorial feature, acclaimed actor, Mathieu Amalric, has turned to crime writer Georges Simenon’s novel about a passionate, yet illicit, small-town love affair between family man, Julien and a pharmacist’s wife, Delphine. This intimate tale shifts from the sensual moments in a hotel to life beyond the blue room and a crime that will trigger the collapse of the walls separating Julien’s two lives.

THE CONNECTION (La French)
Director: Cédric Jimenez
Cast: Jean Dujardin, Gilles Lellouche, Céline Sallette, Mélanie Doutey & Benoît Magimel
The true tale behind the Hollywood hit The French Connection is now told from the European perspective in this exciting police drama. Jean Dujardin plays a relentlessly dedicated magistrate, Pierre Michel, who is reassigned to Marseille in 1975. The port city is ruled not by law, but by the terrifying mafia boss, Gaetan Zampa. Before long, Michel realises that to make a difference he will need to change his methods. This tough, fascinating film tells the little known story of how a ruthless international drug syndicate came undone.

THE GATE (Le Temps des Aveux)
Director: Régis Wargnier
Cast: Raphaël Personnaz, Olivier Gourmet, Kompheak Phoeung, Steve Driessen & Thanet Thorn
From the Oscar® winning director of Indochine,The Gate is set in French Cambodia during the reign of Pol Pot in the early 1970s. A true story, it relates the capture of François Bizot a French ethnologist, who is imprisoned by the Khmer Rouge and accused of being a CIA spy. François forms an unlikely bond with his interrogator and torturer, Duch, a man with a pragmatic sense of morality. Assisted by Duch, François escapes Cambodia. Years later, their paths cross…under very different circumstances.

GIRLHOOD (Bande de Filles)
Director: Céline Sciamma
Cast: Karidja Touré, Assa Sylla, Lindsay Karamoh & Marietou Touré
A story of female empowerment set in the tough neighbourhoods of Paris. Marieme is a shy 16-year-old who lives with her frequently absent mother, a domineering older brother, and two younger sisters who mostly fall to her responsibility. Left behind at high school where she’s told her grades are too poor to continue, Mariame is soon lured out of her shell by three vivacious neighborhood teens. She quickly adopts their flashier look and adapts to their bold, often reckless behavior, making both foolish and brave choices as she struggles towards independence.

THE NEW GIRLFRIEND (Une Nouvelle Amie)
Director: François Ozon
Cast: Romain Duris, Anaïs Demoustier, Raphaël Personnaz, Isild Le Besco, & Aurore Clément
Effortlessly fusing the best of Hitchcock and Almodóvar, this superb psychological drama owes its origins to a Ruth Rendell short story. Claire is grieving the loss of her very best friend, who has left behind a husband, David, and a newborn baby. But during an unannounced visit, she is shocked to discover David nuzzling his infant whilst wearing his dead wife’s clothes. Unfazed, David explains that his former wife was aware of this particular idiosyncrasy and over time, Claire overcomes her initial reaction and helps David to create his own female persona to inhabit.

SAMBA (Samba)
Directors: Eric Toledano, Olivier Nakache
Cast: Omar Sy, Charlotte Gainsbourg, Tahar Rahim, Izia Higelin, Hélène Vincent
The writing-directing duo Éric Toledano and Olivier Nakache reunite with The Intouchables star Omar Sy to tell this thought-provoking, cross-cultural romance, set against the backdrop of France’s immigration challenges. Samba (Omar Sy) is a Senegalese dishwasher who dreams of being a chef. Alice (Charlotte Gainsbourg) is his immigration caseworker and his only hope of staying in France. Together, they might find a future, but the path will not be an easy one.

SUMMER NIGHTS (Les Nuits d’été)
Director: Mario Fanfani
Cast: Guillaume de Tonquedec, Jeanne Balibar, Nicolas Bouchaud, Mathieu Spinosi
Michel, an ambitious provincial solicitor with a devoted wife and dreams of public office, is the picture of post-war, bourgeois respectability. However, he harbours a dark secret. Every weekend, he flees to the country to indulge his urge to cross-dress as Mylène, spending time in the company of his old war buddy, Jean-Marie who also has a female alter ego, Flavia. Flavia’s house becomes the secret refuge for a collection of similar minded men, who meet to live, love and sing as women. When they are joined by a young soldier fleeing France’s war in Algeria, the conflict provides a dark emotional backdrop to their double lives. Winner of the Queer Lion Award at the Venice Film Festival 2014.

Dates and venues for the 2015 Alliance Française French Film Festival are: