Whether you’re a fan of comics or not, you probably know who Stan Lee is. He’s the sort of writer whose work has seen him become an icon, and a living legend. Responsible for the co-creation of an ever-growing collection of superheroes and villains, and beloved face behind a wealth of cameo appearances within and beyond the Marvel Cinematic Universe, Stan Lee isn’t letting age slow him down.

It’s easy to imagine iconic figures such as Stan Lee having lives we can only dream of; the sort of divinely fated existences where nothing ever goes wrong and every opportunity arrives on a silver platter. In memoirs like Amazing, Fantastic, Incredible, readers get a look into a life that is nothing like the stereotype, or the movies.

With Stan Lee’s trademark easy charm and humour, his cartoon avatar takes readers through the good times and bad of Lee’s rise to fame, wandering off onto tangents and bringing himself back to the story at hand in a way that feels like a natural conversation with a friend rather than a memoir. The informal, friendly tone works wonderfully to reflect the idea Lee weaves throughout the memoir: that his success is through the overwhelming support of his devoted fans. There’s a mirroring there that’s beautiful to see: while fans read into Lee’s heroic characters aspects of their own personalities they’d like to develop, to Lee, his fans are already heroes in his life.

Artist Colleen Doran has brought Lee’s story to life in vibrant and dynamic images that pay homage to the original artists being discussed, while still maintaining an overarching style that you can’t help but love. Though it must be difficult to showcase the evolving artistry of Marvel artists without turning Lee’s story into a scrap book of cut out images and disparate styles, Doran has done a remarkable job in transitioning seamlessly between styles without letting it become a distraction.

Lee’s story isn’t merely his own: through his memoir we get to see his characters as they evolve with the times, gradually working towards an increasingly diverse cast of characters to inspire new generations.

While it’s clearly targeted towards lovers of comics, Amazing, Fantastic, Incredible is a wonderful read for anyone who wants to see how a man can shape his own destiny and become who he wants to be. That’s the story at the heart of many of Lee’s works: people learning to be heroes, and shaping their destinies rather than passively following along with their circumstances.

This is one of the elements of writer’s memoirs that I adore: the ability to see the way their world view is developed by their lives, and the way their lives impact their art. Not everyone sees themselves as the heroes of their own life stories, and yet, here is a man who clearly understands his value within his life and the lives of those around him; a man who is more than happy to declare himself the hero and set about saving the day.

There’s something incredibly fun about reading someone’s life as a comic, and when that someone happens to be the father of modern comicbook storytelling, you know it’s going to be an amazing (fantastic, incredible) adventure.

Amazing, Fantastic, Incredible is published by Simon and Schuster Australia, and is available through the publisher’s website, through the major e-book retailers, and at bookstores nationwide. 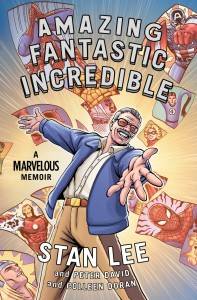 Genre: Memoir, Graphic Novel
Rating: 4 and a half stars