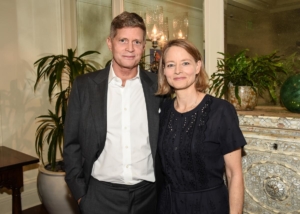 Glen Basner kicked off the conversation saying, “…the independent financing model has shrunk but within the newer smaller pool, this year in particular, it feels like it’s coming back and is quite vibrant but vibrant in a different way because the traditional ways that international distributors are analyzing films has really changed…”

“Before it was the genre and a bit of cast that equaled a certain amount of value now we’re finding that all of our buyers are reading our scripts, which they didn’t always used to do, and they’re really taking a more holistic approach and analyzing the overall film that is on offer. I think that for someone who’s producing and selling movies this is a much healthier way for all of us to be transacting.”

Basner also talked about measures he’s taken within his own company, saying, “We’ve created a diversity committee at FilmNation to progress our company. We’ve had the entire company take on unconscious biased training…we have revamped our hiring process to address unconscious bias.”

Producer Cassian Elwes said, “In 2019, the fact that we’re still talking about whether we should make movies with women or people of color is embarrassing!”

“The studios have dumped the most appalling garbage onto us as cinema goers…Disney, great they are doing a lot of television trying to be diverse. I don’t see that in their future business. And I certainly don’t see it in the future business of the other studios.”

“Now we’re letting in all of these streaming companies coming into the marketplace and that’s positive on some level because of the amount of money they’re bringing to the table.”

Monica Levinson on being a ReFrame Ambassador and its effective program, “The ReFrame Stamp is a great checklist that you go into a production with. For me it’s a goal. ShivHans just got our third stamp. It’s something we are very proud of…The noise [about diversity in film] is what’s causing us to question who we’re hiring as a director, as department heads and what women and people of color we can get into those positions.”

Zanne Devine, CEO, Pacific Northwest Pictures & President, Montana Pictures, “I think the massive amount of content is good because there’s many ways to interpret a hit or miss…Filmmakers are more open to exploring different platforms and ways of releasing a film.”

Each of the panelists has signed on to ReFrame, a joint initiative of the Sundance Institute and Women In Film Los Angeles. The ReFrame stamp is a mark of distinction for projects that have demonstrated success in gender-balanced films