amy winehouse live theatre brisbane rehab by Caroline Russo | on November 10, 2013 | 0 comments | in Interviews | Like it 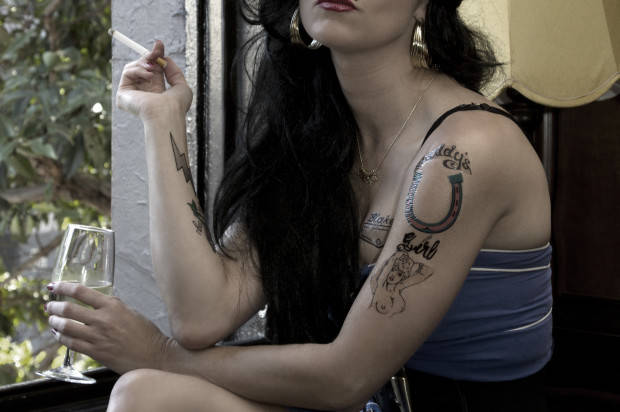 Move over Amy Winehouse because Lisa Adam has created a hilarious character ‘Amy Housewine’ that is more of a train wreck than you could imagine. In her touring show Back to Crack, Lisa Adam explores the highs and lows of an infamous career that was cut short and washes it all down with a bottle of alcohol. Next month at the Brisbane Power House the show will be performed over three fun nights from Thursday 5th to Saturday 7th of December.

Lisa Adam, known for her roles in Jersey Boys and Rocky Horror, also played a part in the recent blockbuster The Great Gatsby. “A friend of mine was working as one of the casting directors for the extras and he asked me if I wanted to be an extra in the film.”

She landed a singing spot in the film and was told to “sing the tears on her face” in front of none other than Toby Maguire and director Baz Luhrmann. “On my last day someone came into the room where I was getting my make up done and said ‘Is Lisa Adam here?’…They just whisked me away and put me into a different outfit, different make up and a wig. It was amazing working with Baz, he is extraordinary and it was such a wonderful experience.”

As one of Adam’s idols, Amy Housewine was created in 2008 in conjunction with Trevor Ashley and Phil Scott (Fat Swan and Little Orphan Trashley) to celebrate the life of what Adam describes as a “modern day poet.” “I think her music was revolutionary for its time. Her voice is so iconic and original, I think that was part of her success. We did a parody of the song Valerie and named it Valium and it kind of took off from there.” Adam began performing the show at various festivals like the Sydney Mardi Gras.

When Winehouse unfortunately passed away in 2011, Adam was so shocked that she cancelled the rest of her shows in the festival circuit. “The original show was very much a parody of her abuse and the tabloid images of her, it was a lot of poking fun. When she passed away I thought well that’s the end of that… I had a lot of affection for Amy Winehouse that her death genuinely shocked me and I know that might sound naïve.”

Adam went on to explain that she thought Winehouse would live until she was 97, but her death had opened her eyes to what addiction can do to a person. “It really made me think about addiction and how serious an illness it is, and underrated as far as public awareness is. I think that a big lesson to society is that these people that are struggling with addiction are a lot of the time ridiculed by the tabloids and the media for being weak. It really is something that we should take a lot more seriously.”

Back to Crack has been readjusted, revamped and returned with a warm welcome. “I did the new show at Mardi Gras with quite a bit of trepidation with how it was going to go. I think changing the character allows the audience to laugh along with me without feeling like they’re being disrespectful.”

Never has a one-woman show been so outrageous but also so inspiring. Adam wishes to raise awareness about addiction and the circumstances that riddled Winehouse’s world. “Inadvertently I hope so. Phil Scott (One of the creators of Back to Crack) said to me that the original show was so funny that it would be a tragedy to lose the whole thing. We changed it so that Amy Housewine is an entity in herself, she is a character that is an absolute train wreck of a person who happens to look and sound like Amy Winehouse and sing her songs, but she thinks that Amy Winehouse copied her. That’s how you can get away with being this outrageous character on stage because you’re acknowledging that you’re not actually Amy Winehouse. We do go into a dark section where she talks about the first time she ever tried Class A drugs and how it felt.”

If you tried to take Amy Winehouse to rehab she’d say “Hell no!” But if you asked Housewine to go to rehab, she’d say “I’ll drive us!” Back to Crack includes all of the classics like ‘Rehab’ and ‘Back to Black’ and also some Housewine favourites like ‘I Love to have a Beer with Amy’ and the unnerving version of Valerie called ‘Valium’. With only three shows at the end of her tour, you better not miss this naughty night out!
For more info on the show go to
http://brisbanepowerhouse.org/events/2013/12/05/amy-housewine-back-to-crack/
December 5th to 7th show dates.