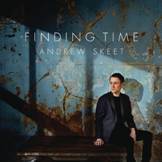 ONE OF THE UK’S MOST EXCITING YOUNG COMPOSERS
AND MEMBER OF ACCLAIMED ALTERNATIVE POP BAND,
‘THE DIVINE COMEDY’, SIGNS EXCLUSIVE CONTRACT WITH SONY CLASSICAL

Sony Music Entertainment Australia is delighted to announce the exclusive signing of British composer, Andrew Skeet. Widely known for his compositions for film and television and as part of Neil Hannon’s The Divine Comedy, Skeet is also one of London’s busiest orchestrators, arrangers and conductors.

His debut album for Sony Music entitled FINDING TIME will be released in June 2015. Further details on the album will follow in due course.

Appearing first as a gifted boy treble at Glyndebourne Opera, The National Theatre and on the soundtracks to Yentl, Another Country and Monty Python’s The Meaning Of Life, Andrew Skeet studied piano and composition at the Royal College of Music and has written more than 60 scores for television as well as collaborating with artists as diverse as Sinead O’Connor, Imogen Heap, Suede and George Michael. He joined The Divine Comedy in 2004 and has recorded and toured three albums with them, also collaborating with Neil Hannon on the musical Swallows and Amazons at the National Theatre and the opera Sevastopol at the Royal Opera House.

Andrew Skeet has a close association with the London Philharmonic Orchestra with whom he worked on the theme for ESPN’s Wimbledon coverage 2014 and THE GREATEST VIDEO GAME MUSIC albums, the first of which reached the Billboard 100 Top 20. Andrew Skeet has orchestrated and conducted many high profile feature films and prime-time TV dramas, including Ridley Scott’s The Counsellor, Nick Murphy’s The Awakening, Cuban Fury starring Nick Frost, The Game, Upstairs, Downstairs and Desperate Romantics. He is currently working with Daniel Pemberton and Guy Ritchie on Ritchie’s forthcoming new film The Man from Uncle.

Liam Toner, Head of Classical and Jazz at Sony Classical UK commented: “We are all delighted to welcome Andrew Skeet to the Sony Classical label. Andrew is one of the UK’s brightest and most versatile young composers and his beautiful music is elegant and poetic. We are delighted to be working closely with him at this exciting time in his career”.