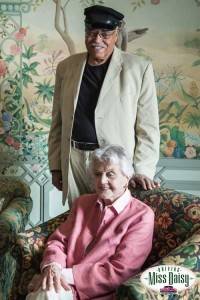 In the intimate surrounds of QPAC’s Lyrebird Restaurant, only 100 guests will enjoy a delicious morning tea, followed by a hosted in-depth conversation with actors Angela Lansbury and James Earl Jones and concluding with a brief Question and Answer session.

Chief Executive John Kotzas said that the Centre was pleased to be working on this once in a lifetime event with The Actors’ & Entertainers’ Benevolent Fund.

“QPAC is very excited to be host to the Australian Premiere season of Driving Miss Daisy and we are pleased to offer this unique event with these two stage and screen legends, with proceeds going to a fund that directly benefits those who are integral to our industry.

“On behalf of QPAC and The Actors’ & Entertainers’ Benevolent Fund Queensland, I would like to extend my sincere thanks to Angela Lansbury and James Earl Jones for generously giving their time to support this local cause,” said Mr Kotzas.

The proceeds of this fundraising event will benefit the Actors’ & Entertainers’ Benevolent Fund (Qld) Inc.

President of the Fund, Paul Dellit said “The Actors’ & Entertainers’ Benevolent Fund (Qld) Inc. is a registered charity, that has been in existence in Queensland since 1975 and during that time has been able to assist hundreds of performers who for one reason or another have fallen on hard times and needed a helping hand”.

The Actors’ & Entertainers’ Benevolent Fund (Qld) Inc. is run by a volunteer committee these have included Actors, Artistic Directors, Producers, and Arts Administrators. All contribute to the fundraising efforts of the Fund and in the deliberations concerning applications for assistance.

Angela Lansbury has enjoyed a career spanning seventy years in motion pictures, on stage and in television. She is a five-time Tony Award winner for her lead roles in the Broadway musicalsMame, Dear World, Gypsy, Sweeney Todd and most recently for the Noel Coward play Blithe Spirit. She has appeared in almost 60 motion pictures and from 1984-1996 she made television history starring as Jessica Fletcher on Murder, She Wrote, the longest-running detective drama series in TV history, winning four of her six Golden Globe Awards.

James Earl Jones voice is known by people of all ages and walks of life, from Star Wars fans who know him as the voice of Darth Vader to children who know him as Mufasa from Disney’sThe Lion King. Jones won Tony Awards for his breakthrough role as boxer Jack Johnson in The Great White Hope, and for August Wilson’s Fences. His memorable film performances includeField of Dreams, and the Tom Clancy blockbuster trilogy –The Hunt for Red October, Patriot Games, and Clear and Present Danger. In 2011, he was presented him with an Honorary Oscar in recognition of his long and distinguished career.

Don’t miss the chance to attend this special event featuring two legendary actors in conversation.  To book go to www.qpac.com.au or phone 136 246.

A Conversation with Angela Lansbury and James Earl Jones

Please Note: This is not a meet & greet event