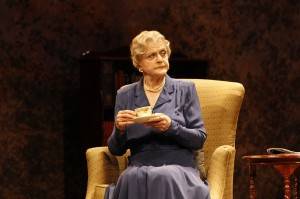 Now wonderful to be able to kick-start On Centre Stage’s new lease of life in Hush, Hush Biz with an international production that’s likely to be hailed as one of the year’s finest.

When OCS heard that 87-year-old Angela Lansbury was coming to Brisbane, along with James Earl Jones, 82, the word vintage sprung to mind.

Even the couple’s vehicle, the 1987 Pulitzer Prize winning play, Driving Miss Daisy, had an old-world feel about it with its take on life in a racially-driven Georgia in the 1950s and ‘60s.

The expectation was that Miss Daisy would be respectful, but staid, with measured performances from two octogenarians and Boyd Gaines as Daisy’s son wasn’t even considered.

After all Miss Lansbury is best known in Australia as the lightweight sleuth Jessica Simpson’s in TV’s okay murder mystery series, Murder, She Wrote, while James Earl Jones is the voice of both Darth Vader and The Lion King.

It is easy to overlook the fact that Miss Lansbury has had a long and distinguished Broadway career, picking up five Tonys along the way, and Jones has two.

(And for the record Gaines has four).

Now having seen Miss Daisy, the word classic jumps to mind as the trio gave us a night to remember in 90-minutes of inspired craftsmanship.

The chemistry between Miss Lansbury and Jones was magical, and even the silences were golden, as their two characters – Miss Daisy and  Hoke- wrestled with each other’s reason for being.

The action and reactions was spot on as the three played off each other like exquisite musicians drawing the audience into their enchanting fold.

The sum was definitely greater then the individual parts and the audience had that wonderful theatrical feeling that they were witnessing something truly special.

How unfortunate that Australian hasn’t seen Miss Lansbury on stage here before and quite frankly – and realistically – I doubt will see her Down Under again.

The chauffeur has been recruited by her concerned son, Boolie, as Miss Daisy has become something of a liability on the road, but it takes time for this cherished relationship to blossom like some rare orchid.

There’s more to the plot in Alfred Uhry’s much loved play – filmed in 1989 with Jessica Tandy and Morgan Freeman – but like Daisy and Hoke I’ll leave you to find your own way. 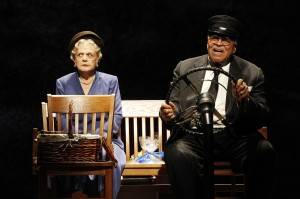 No End to Angela

The remarkable Angela Lansbury’s career is as varied as its long as the actress has tested the water in so many theatrical and dramatic forms and fined it to her liking.

The New York Times once begged the question, ‘Is there no end of things that Angela Lansbury can do?’ and it seems the answer is no.

Miss Lansbury, who is the granddaughter of onetime leader of the British Labour Party, George Lansbury, was born in 1925 and first went to Los Angeles in the early years of World War II.

Her first film, Gaslight, in 1944, which starred Ingrid Bergman, had her playing a conniving maid and Miss Lansbury has had as much success playing villains as motherly types in movies such as Bedknobs and Broomsticks.

She has made nearly 60 films – although despite being nominated several times never won an Oscar – including The Manchurian Candidate,’62, as the delectably evil Mrs. Iselin.

The actress made a late entrance into Broadway, first in 1957 playing Bert Lahr’s wife in Hotel Paradiso and then three years later Joan Plowright’s mother in Shelagh Delaney’s Taste of Honey.

The she returned to the West Coast to appear in more film and TV, including Murder, She Wrote (1984-’96), which has the distinction of being the longest running detective drama series on TV.

Miss Lansbury also won other major awards and found time to have a family life with husband Peter Shaw who died in 2003. The couple was married for 53 years and has three children and three grandchildren.

The Angela Lansbury story certainly reads like a wonderful life.